Facebook Twitter Email Flickr Vimeo Link
Well after a couple of cancelled attempts I finally headed up to Wales for a promised wildcamp weekend with my nephew, Connor. Picking him up from Shrewsbury railway station we headed along the A5 towards Betws-y-Coed. The Friday evening traffic was a little busier than expected so we arrived later than planned so we dived into Dolgam campsite, near Pont Cyfng, pitched the tent and headed for the pub for dinner.
Our planned route for the weekend was a traverse of the Glyders from Capel Curig to Y Garn with a wildcamp at Lyn Clyd, then descending down into the Ogwen Valley before heading up and over Carneddau and back round to Capel Curig. On a scorching hot Sat morning and after the obligatory bacon buttie and tea at Pinnacle Cafe we set off at 10am – just after Connor bumped into his geography teacher from York in the car-park!
My pack immediately felt a little lighter than last time though the benefit of sharing the load of the tent was restricted to Connor carrying the tent-poles. We were soon in our stride with me expending a little more effort in avoiding the boggy ground thanks to making a last minuted decision to wear my new TNF Hedgehog trainers, rather than boots. The lack of weight on my feet was immediately noticable, as was the fact that they’re a little ‘baggy’ around the forefoot! We reached the top of Foel Goch (805m) and stopped for a snack before continuing westward and up to Glyder Fach. I was a little unsure of whether the sharp Glyder rock would shred my trainers but the they were wearing well, giving excellent grip on the rock and allowing me to be a little nimbler on my feet than normal. Connor was suitably amazed by the Cantilver stone and edged gingerly up for the obligatory photo-shot before he clambered up to the actual summit of Glyder Fach. 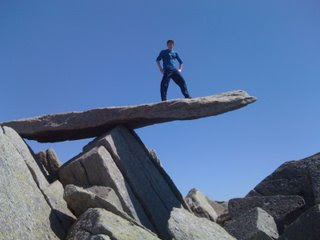 My nephew Connor, looking nervous on The Cantiliver
We continued along the ridge and up to the summit of Glyder Fawr for lunch. We’d started with 5 litres of (heavy)water between us but, on what was one of the hottest days of the year so far, we were getting through it rapidly and Connor finished his by lunch. Looking west you could see the summit of Y Garn and the frustrating realisation that to reach it we would have to descend about 1,000ft before then re-ascending. The scree slopes down the west face of Glyder Fawr were steeper than I recalled and called for careful foot placement. We topped up our water from Lyn y Cwn, giving the Steripen its first outing (giving it 2 cycles just for good measure!) before the last climb up to Y Garn – my first time up there. From the peak we could see down into Cwm Clyd and our intended camp at Llyn Clyd.
Descending north-east from the summit we veered off the path and headed into the cwm in search of a suitable pitch by the lake. A good scout around found only a couple of spots flat enough to take the tent. One was ideal but for obvious signs of previous wildcampers – a half-buried bag with unknown contents but enough to put us off! By now Connor was making strong hints that he’d like to camp on the island in Llyn Idwal that I’d previously frequented and so we decided to descend another 1400ft down to Llyn Idwal.
We arrived around 6pm and the lake was busy with tourists swimming and walkers descending the main path from The Devils Kitchen. It was way too early for a conspicuous tent pitch on the island so we bided our time rock-hopping and exploring the shore. With still no sign of people leaving we decided to get the stove out on the shore and prepare dinner. The dehydrated Mountain House pasta with lasagne source was positively delicious and welcomed after our exertions of the day. It was 9pm before the swimmers left and even then there was the odd couple still coming up to the lake so we didnt pitch the tent till almost 10pm. 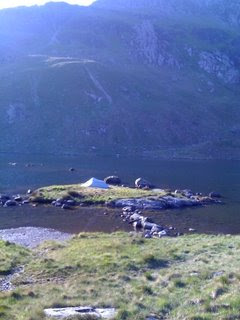 Island wild-camp
The strange thing was I never really felt comfortable on the island this time – I felt way to conspicuous and the island showed signs of animal occupation and human visitors (which we took away with us, but why do people have to leave stuff??). The night passed away uneventfully but conscious of our exposed position we were up early to drop the tent before following the main path back down to the Ogwen Valley for 9am.
Crossing the A5 we soon located the start of the path which heads straight up Pen yr Ole Wen. From the other side of the valley I’d noticed that about half way up there was a large buttress with the path veering off to the right – a fact I forgot about an hour later. The first 10m of the path involves a short scramble which set the tone. It was a steep pull up and before we knew it we were on a steep scree slope with a feint zig-zag path evident amongs the loose rock. Looking back I realised we’d missed the path off to the right of the buttress but we decided to press ahead. Connor then tells me he’s not keen on heights and he was a little nervous on all this loose rock, clambering on all fours! 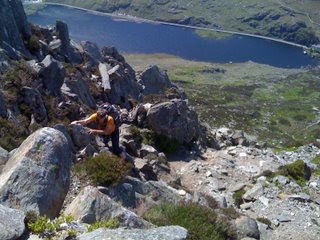 Scrambling on Pen y Ole Wen
As we got higher the mixed terrain involved short sections of loose scree, path and the odd rocky scramble until we reached a rather (almost vertically) steep and narrowing gulley – and there was little option to climb up an almost vertical wall, aided by convenient hand-holds and spikes everytime you reached up. We probably only climbed about 10 meters though with some trepidation over where we were actually heading. Would it get worse, would it head nowhere? I wouldn’t fancy down-climbing it but I was comforted by the fact the polished rocks gave a sign that the route was relatively well-used and Connor was actually enjoying this more than the loose scree (don’t tell his mother!). Eventually the slope eased and we rejoined the main path to the summit, tucking into an early lunch behind a shelter wall.
I’d never been up onto the Carneddau before. From a distance they almost look like gentle rolling hills, compared to the presence of Snowdon and the Glyders bare rock across the valley. Once up high I was amazed at the sheer bulk and enormity of the Carneddau mountains and the scale of the west-facing cliffs and cwms. Heading across the ridge we ticked off Carnedd Dafydd and continued on. The obvious (and originally planned) route was onward to Carnedd Llewelyn and then south-east, crossing the ridge of Bwlch Eryl Fachog and onto Y Braich before dropping down gradually back towards Capel Curig. I was however conscious of the time – we still had a 4-hour car journey that evening and it was clear I’d underestimated the time it had taken to climb up Pen yr Ole Wen and the sheer size and distance involved once up on the Carneddau. The wind had also really picked up so we decided on a short-cut, dropping down directly into Cwm Llugwy, heading straight down towards the reservoir. Again it was easy to underestimate the time taken to pick our way down but after couple of hours we’d reached the road which leads back down from the reservoir to the A5 whereupon we still had a 4km walk along the valley back to Capel Curig.
We’d had a great weekend, with fantastic weather (too hot, really), covering about 14km on Sat and 17km on Sunday (see below) and great to get out after my recent health-scare. I’ll write up some notes on my new kit in later. 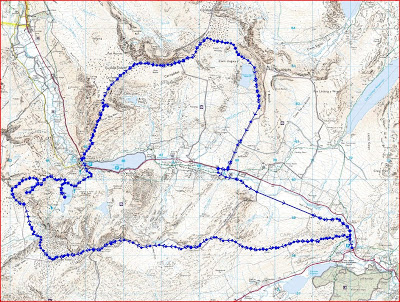 6 Replies to “Glyders and Carneddau Wildcamp”