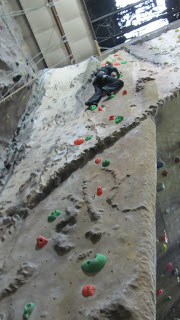 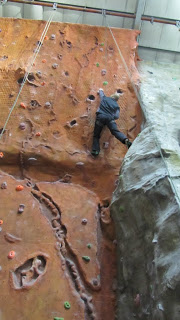 In lieu of hill time, whilst I’ve been busy at work and the weather has been lousy, I plumped for having a go at some indoor climbing.   A couple of lessons at Craggy Island in Guildford sorts you on the basics of ropework, which is basically knowing how to tie yourself in to the rope (re-threaded figure of eight with a stopper knot) and belaying safely.   Under the guidance of an instructor you move through some easy climbs, finding your feet and balance and learning some basic movement.  Although the sessions were only 90 minutes it was hard work and odd muscles were protesting the day after!    All of the walls are graded, based on you sticking to the same colour holds for that route.  You soon start stretching yourself (literally), determined to crack a route…if you have the energy.  Though the pro’s will no doubt say its skill and balance though I’d say strength and endurance definitely play a part as you move up the grades and my forearm and grip strength were sorely exposed!!
There is also a mental element with some moves a real jigsaw that need piecing together carefully. It’s great fun and I can see it really helping movement and balance when scrambling.  It’s pretty busy at the weekends but it’s a great atmosphere, even if you’re simply sitting in the cafe watching others over a coffee.

We spent a few days in Wales last week and while the weather wasn’t great we headed over to the Beacon indoor climbing centre, a few miles west of Llanberis.   Confidently signing ourselves in as ‘competent’ (after reading a lengthy disclaimer!) we were let loose on the bewildering array of walls.  Taking responsibility for ourselves added to the sense of achievement and we managed to complete our first grade 6a route and left exhausted some four hours later!   The actual building has an interesting history as it was originally used by Marconi to transmit signals across to the US and Australia – ironic as the mobile phone signal wasn’t great!  If you’re in North Wales and fancy trying something different then its well worth a visit – but take a fleece as it’s a little chilly in winter!

As we left Betws y Coed I couldn’t resist popping into the Cotswold Outdoor Rock Bottom store as we were passing.  They had harnesses and climbing shoes on sale pending the arrival of new 2010 stock so I managed to pick up a Black Diamond Momentum harness and some Red Chilli shoes with 20% discount.   We were headed over to my parents in North Lincs so the next day took the opportunity to venture over the Humber Bridge to Rock City in Hull – an excuse to dirty our shiny new gear.   Having negotiated the practical test (tie-ing in and belaying) without embarrassing ourselves I was unsure what to expect, but we were greeted with the largest indoor wall I’ve seen so far.   A vast selection of routes/grades, easy angles, over-hangs, multi-featured walls and a couple of large bouldering areas.  At a fiver for a whole day (a bit more at weekends) and only a pound to hire a harness its also a very cheap day out, have fun and get fit into the bargain! 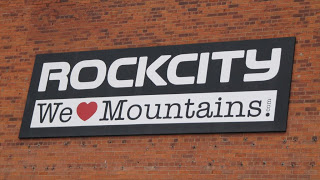 I’m actually kicking myself for not trying climbing earlier. I’d always imagined there was some kind of mystique about it but as I’ve gradually found my hill feet again and started a bit of scrambling, then a spot of climbing was an obvious next step.   When the weather improves I’d like to have a crack at some outdoor climbing – adding an extra dimension to enjoying the mountains.

2 Replies to “An Extra Dimension”