After a stressful week at work I took Friday off with the promise of fine weather for the weekend making a pleasant change to the usual forecast – in fact I was beginning to think that the iphone weather app was stuck on the rain symbol when looking up Betws y Coed.  The strangely quiet traffic conditions were offset by me making the mistake of checking my work emails thus kicking off a flurry of frantic phone calls inbetween bouts of no mobile signal as I sped along the A5.   Snowdonia looked fantastic spread out before me, the clear skies made it easy to pick out the profiles of all the major peaks which were still dotted with the last remnants of winter snow. 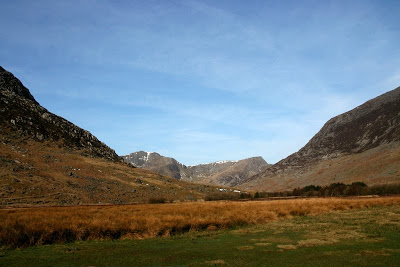 Arriving in Betws-y-coed around 4pm I did the usual round of Cotswold Outdoor and stocked up on provisions for the weekend.  I’d already decided I was to camp at the Gwern Gof Uchaf campsite at the base of Tryfan (not to be confused by Gwern Gof Isaf a 1/2 mile back down the A5).   I could walk straight from the campite so I stocked up sufficiently so I wouldn’t need to pop back to Capel Curig in the morning.  The campsite is rather small but has hot water, toilets and a shower and is in a great location.  I had a few Mountain House meals but the lure of some decent food (I needed the energy for the next day, honest!!) – led me to drive down to the Bryn Tyrch Inn in Capel Curig.  Sitting on the sofa in front of the fire I chatted to a teacher who was attending a refresher first-aid course at Plas y Brenin.  Arriving back at the campsite it was apparent that the clear skies were going to mean a cold night and chilly it was.  I took the PHD Minim 300 bag and my old Thermarest Prolite3 mat and certainly noticed the cold – my Suunto Core showed 3 degrees C during the night and there was a hint of frost as I nipped to the loo at 6am.  I’m sure my NeoAir mattress would have been warmer (and more comfortable) but alas it had mysteriously succumbed to a rip (more like a cut) when our daughter slept on it at my parents a month ago and I had yet to track down a repair kit.  I’m still finding the limits of a) me and b) my sleeping bags and I suspect the Minim 300 and I were at our limit.

I was up and off by 9am and it was already clear it as going to be a warm day. I’d packed light in lieu of the forecast (including leaving my dSLR camera behind) and crossed the A5 and headed up towards Cwm Lloer and the east ridge of Pen yr Ole Wen which I’d last tackled in several feet of snow.  I was already perspiring as I reached the summit, getting a much better view of the route of our winter climb at New Year.  Though there was no snow directly on the summit, the ridge around to Carnedd Dafydd was lined with a cornice and pockets of snow clung to the steep sides of Cwm Lloer.

Carnedd Dafydd was quickly dispatched with a quick snack-stop to admire the views across the Glyders to Snowdon beyond.  The ridge along to Carnned Llewelyn is longer than it looks and last time here we had to cut-short and head off down into Cwm LLugwy due to the wind.  As I headed around the ridge long I kept turning around to study the intricacies of the cwms below Carnedd Dafydd (Cwmglas Bach, Crib Lem) as they unfolded into view.  I was trying to make out the Crib Lem spur, a grade 1 scramble to the summit of Carnedd Dafydd, which I planned to do another time.

The summit of Carnedd Llewelyn was bit of an anti-climax, as you’re already quite high its a relatively gentle trudge up to highest point of a relatively innocuous summit plateau.  Yr Elen looked far more attractive out to the west. 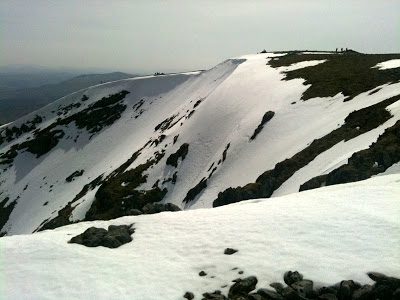 What the summit lacked in drama it made up for in terms of the 360 degree panoramic views.  After a spot of lunch, hiding under a cap to give my poor head some respite from the sun, I needed to decide where to head from here.  The Carneddau is more of north-south spine – a traverse of the range would make a great day out if you arranged for transport at the other end, otherwise it tends to be an out and back affair.  It was a toss up between heading over to Yr Elen or heading further north along the Carneddau and getting a feel for the more isolated, outlying peaks.  I chose the latter quieter option which would give me a different perspective on Cwm Eigau and the route of my last wild-camp.    The northern slopes of Carnedd Llewellyn and in particular the drop into Cwm Eigau still held a surprising amount of snow and a suspect looking cornice was to be avoided.  I headed north losing height and then climbing back up to Foel Grach – another somewhat anonymous summit but which is still a proud 976m.  From here Yr Elen and the steep cliffs dropping into Cwm Caseg really take shape – a real mountain reveals itself.  The psychology of knowing that going further north would merely lead me to re-trace my steps led me to head back to Carnedd Llewlelyn.  The heat was taking its toll and I was conscious that I didn’t really know how much liquid I had left in my 2 litre Camelbak bladder – one of the downsides of a bladder over a bottle.

The summit was now much busier as I arrived and took an immediate left, heading east down towards Bwlch Eyrl Farchog.  Dropping down the initial slopes, crossing odd mini-snowfields and looking directly down towards Ffynnon Llugwy you suddenly get areal impression of how high you really were.   The descent down to the bwlch took longer than expected but offered impressive views into Cwm Eigau, the silence occasional punctuated by climbers calls.  My feet were hurting a little by now and I was slurping on my last few drops of water.  Upon reaching the lake (and probably just missing Robin and his Scarp) I chose to follow a feint track down to the bottom of the valley which gave a softer (often very soft and boggy!) option for my feet than the metalled access road.  A quick shower and I decided I’d earned a proper meal and drove to the Tyn y Coed pub in Capel Curig for a curry and a pint of Guinness.    A warmer evening meant I slept better and whipped up a fried bacon sarnie for breakfast – one of the undoubted treats of camping!!

As I was due to head home later in the day I decided to simply head up the north face of Tryfan, planning to descend via Heather Terrace, the obvious band cutting across the east face. I decided to pack even lighter and used a Berghaus Mach 24 pack leaving the camera and flask behind, packing only food, water and a LIM Barrier smock.  The old adage that you’ll never re-trace the same route up Tryfan holds true. Approaching from the east rather than the usual route up from car-park on the A5 I soon came across several groups coming up from the north-west.   The lower slopes tend to funnel people into one of a few routes as people tend to follow the more obvious worn tracks.  More confident from my recent indoor climbing I was keen to take a more direct route where I could, giving me more flexibility in avoiding the crowds and practicing a more hands-on approach.  It was great fun picking a route up – even the steeper bits are short-lived so although you can get into a few awkward spots you’re rarely over-commited.  The summit appears all to quickly and was, as expected, rather busy with the usual bravado being exhibited by mortals stepping across from Adam to Eve (or vice-versa).  An Aussie girl spent 15 mins before being coaxed into making the step/jump to much applause.  Heading directly south, up and over the south peak, I picked my way down towards Bwlch Tryfan ending with a rather awkward down-climb, before heading over the stile and scrambling down the scree slope to the start of Heather Terrace.  Picking my way along I stopped for 30 mins to chat to a couple climbers who were attempting to find the start of a grade 3 scramble, hoping they’d correctly counted to the 19th rib of rock!  I always seem to find the return leg longer than the outward leg and Heather Terrace stretched back north but  dropping surprisingly little height in the process.   Eventually I reached the path down into Cwm Tryfan and headed past Tryfan Bach to the campsite. 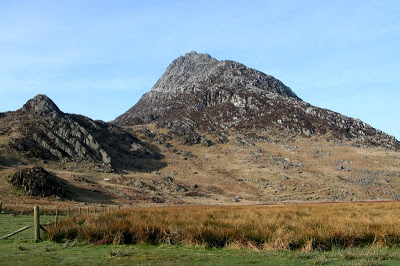 Weekend trips are always over far to quickly but it’s always well worth the effort – the sense of well-being even making the 4 hour drive back more bearable.   The fantastic spring weather, clear skies, big mountains interspersed with the last remnants of winter snow combined to give a real ‘alps’ feel to the weekend that my iphone camera would never do justice   No wildcamp, but I’d put in more miles and metres than I would have done encumbered with a bigger pack.  The Carneddau had revealed more of their character and yet there is still far more to explore.

I’ll post some observations on kit including the iphone Memory Map app later and I have a few more pics online here.