I’ve had the PC version with a full set of Memory Map 1:25k maps on my PC for a couple of years.  The novelty of using my Garmin GPS and downloading tracks to MM soon wore off and I ditched the GPS and reverted to map/compass.   I still used MM for planning/plotting and often printed off my own sections of mapping which were more convenient that wrestling with full OS Explorer maps in the wild (particularly in the Carneddau where you have to flip over to the other side of the OS 1:25k map).  Great as the good old OS mapping is I was never really impressed with the Memory Map software – it felt old, clunky and not particularly intuitive.  As a long time iPhone convert I was excited to see a slew of mapping applications being released early this year.  The excited anticipation of a MM for iphone app quickly evaporated when they launched it with a £20 price-tag.  This was seen by many as a bit OTT  a) for an iphone app, and b) when you’ve already paid for the OS maps.   The early version also didn’t allow you to create routes on the phone though this has since been added.   I waited for the updated version before downloading their ‘free’ version which is for people who don’t already have MM maps and offers the abillity to download maps directly to your iphone via MM’s own online mapping store.  I figured I’d have a play with the version before shelling out the £20 for the privilege of transferring my own maps.  I was also interested to see what the Government’s much touted freeing up of the OS mapping data would do to the market – not a lot it seems!.

With the free version of the MM app you are immediately greeted with the OS GB1:1 Routeplanner base map which is of little practical use.   What was not immediately clear is that by opting for the ‘More Maps’ option you are invited to create an online account on the MM map store from where you are entitled to download 400 square km of mapping for free.  You can choose what area and what scale mapping you wish.  As you zoom in on an area any un-purchased mapping is automatically blurred out.  However by clicking on the ‘activate’ button you are taken to the online store. Before you download it tells you the size of that map portion (e.g. 47 sq.km) and how much of your free 400 sq.km you have remaining.  Thankfully the map sections are far smaller than normal OS maps and so I could easily select all the relevant 1:25k mapping for the Carneddau and the Glyders I neede for the weekend, and I still have over 200sq.km free so I can’t see the need to buy the £20 full version just yet.

With the mapping for the weekend sorted it was now down to playing with the app and getting to grips with the MM way of doing things.  Creating waypoints and routes was not quite intuitive – it looks it but I should have RTFM!  Routes are rather fiddly as you cannot place waypoints very accurately with your finger – if you have large fingers then creating a route would be a painful experience, though you can move the individual points afterwards.  This is also a limiting function of the iphone and its touchscreen interface as much as MM’s software.

Of course playing with an app in the comfort of your own home and out in the field is different.  It’s a well know fact that the battery life on the iphone isn’t great and so I realised I was unlikely to start the MM app and leave it on, choosing to hit the top button the phone to put it to ‘sleep’.  The app includes a logging feature which includes speed, distance, moving time etc.    I found myself periodically taking the phone out of my pocket, switching it from sleep to check my position.  The phone appears to get a GPS location fix quickly and displays your position on the map.  In terms of creating a ‘track’ it assumes you have travelled in straight lines since your last position, so a review of my route shows a series of linked points.

One hint that I picked up from the MM Support Forum was that if you open the iphone ipod app and play music and then open MM, then when you hit the sleep button the phone continues to track you.  Althoug the screen is blank (saving the battery) it must be do to with the fact that until the new iphone OS4 software is released and supports mutli-tasking, the ipod app is one of a select few apps that is able to run in the background and hence must keep the phone on.  I haven’t tried this and I’d imagine it would have a dramatic affect on the battery life.

In use, one odd problem I did encounter on the first day was a couple of spurious incorrect GPS fixes which has the affect of making it appear that I’d suddenly jumped 100km or so to the east and back.  This happened a couple of times on the first day and as well as resulting in spurious spikes in my on screen route, it also rendered the logging info useless as it meant my distance travelled was exaggerated – see screenshot below as I’d be hard-pressed to do 244km in 1hr33min!! 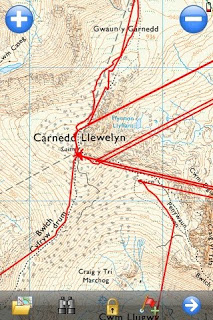 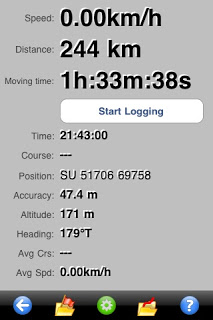 Of more concern was that on the second day when descending Tryfan via Heather Terrace this appeared to happen every time I switched on the phone to get a fix – see screenshot below.  N.B. for those who do not have an iphone I don’t mean physically switch it on and off every time like a normal phone – pressing a small button puts the screen and any open application to sleep but the phone is still awake to receice calls. 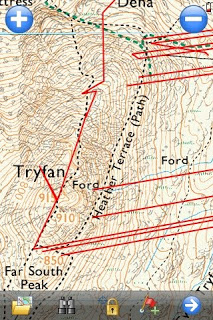 In real use some of the limitations are a function of the iphone itself,  particularly battery life and robustness – I dont normally use a case, preferring less bulk but in the mountains a case would make sense – possibly one with a built-in battery-pack.  GPS accuracy seems good, aside from the spurious spikes which I’m still unsure whether they were a function of the MM software or the GPS receiver.  I seem to recall having the occassional similar spike on my Garmin GPS tracklogs – but certainly not to the extent in the screenshot above.  I keep meaning to post the screenshot on the MM support forum for feedback.

All in all, its a reasonable effort.  The availability of full OS 1:25k mapping on your screen is impressive – though in practice the small screen size means you do need to regularly zoom in/out.  At the moment I’d still class it as a nice to have or luxury and would only see it as a back-up option (as I would any battery-reliant GPS device) though as I would normally take my phone anyway then it does offer the benefit of ditching a separate GPS device.   As battery and processor technology improves then you can envisage  discrete GPS devices coming under more pressure from other more-unified devices such as the iphone and other smartphones, which in the end can only be a good thing for us consumers.