My parents and sister booked a microlight flight as a Xmas present that I never quite got round to arranging until last weekend when ,after much pressure and the pending expiry of the gift voucher, we descended on Rufforth Airfield near York, courtesy of Airsports Training. 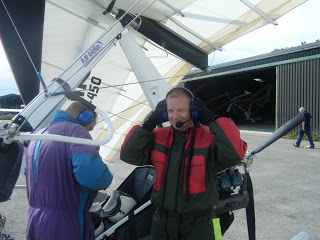 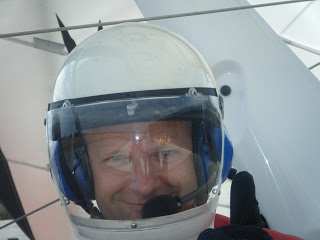 Surprisingly, I didn’t seem to have time to be nervous as after a quick briefing and safety check we were taxiing along the run-way.  I wasn’t quite prepared for take off which was a) fast and b) quick and steep – we were airborne before I knew it and climbing quickly by which time I was conscious there was not much keeping me in and nothing to hang on to!   It was a lovely clear afternoon and so the view across to the dales in the west and the moors to the north and the various power stations to the south.  I’d worn my Sunnto Core watch so I could keep an eye on the altitude and we quickly ascended to around 1,000 ft and a cruising speed of 65-70mph.

I was surprised by the buffeting from the wind which is consistent of sticking your head out the window of a car doing 70mph – obvious really, though the air was pretty calm apart from the odd small gust which had a noticable effect.  We headed towards Wetherby and followed the A1 north to Boroughbridge – strange how even having the freedom of the skies pilots use roads as an obvious navigational aid.   After about 30 mins I have to admit I started to feel a little queasy with the constant moving.  I concentrated on the horizon till I was invited to take-control and actually fly (well, I guess it could be better described as steering).  The control are rather straightforward – shift forward to go up, back to descend and left/right as you’d expect.  Letting go of the control-bar allows the plane to settle into a stable neutral position – quite comforting!

We headed back towards York giving great views of the Minster and the race-course before following the River Ouse for a while.  Looking down I was surprised how many swimming pools there are in York – it’s not that warm up there!  We headed back to the airfield and as we approached the descent was a bit steeper than I expected but after a perfect landing (thanks to the pilot not me) we were back on terra-firma…..where feet are designed to be!  It was a great idea as a present and good fun but I’m not sure I’ve found a new hobby, but I’d recommend having a go at least once.

PS.  I was chatting to a guy at work who confessed that he actually developed a fear of flying after a microlight flight.  He had done it a few times before but on one trip, after a gust of wind, he freaked and has forever since been scared of flying, even in passenger jets!