After a quiet night we left the hut and headed further north-east ascending gently toward the Norwegian border, taking in a detour to inspect an empty border hut.  We crossed a large reindeer fence replete with an excessively sculpted stile, and set our sights on a visible col on the main ridge marking the watershed.  This was big country, with big skies and not another soul to be seen.   The undulations in front gave clues to boggy areas we contoured around, crossing a few small streams until we reached the foot of the ridge.

A steep climb soon found us at the col for a lunch break while watching a large eagle circling above. A long rocky descent saw us eventually drop down to a river and a planned crossing by packraft.  Drawing the short-straw I inflated my raft as we took turns to shuttle ourselves across, with Jaakko pulling the raft back each time using a throw-line. 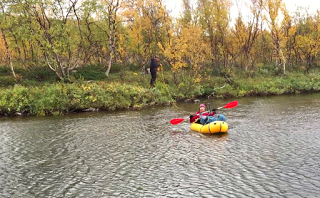 After dropping height we were amongst the trees and the late afternoon sun lent a warm glow to the autumnal colours.  Another hour of boggy ascent found us by a small lake that would mark our campsite for the evening.  Struggling to find a space clear enough to pitch our shelters we were treated to a gloriously technicolour display as the sun descended.  An owl circled the lake as a reddish glow lit up an endless view. 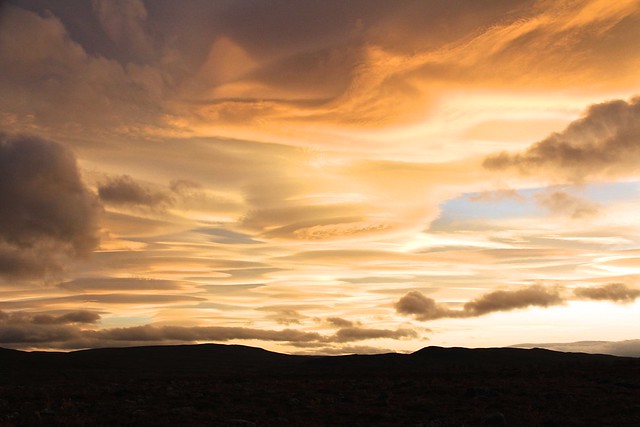 We woke to gloriously blue sky.  After another porridge breakfast I was perched behind a rock with trousers down when a heard the cry “Wolverine, wolverine”.  I looked up to see Jaakko pointing and turned to see a dark thick-set beast running off behind me.  Apparently it had been coming my way until Jaakko shouted, though the sight of me with my trousers round my ankles would surely have made it flee!   We broke camp and made our way upwards, contouring around a peak above the lake.

The landscape was changing – the colours, the increasing trees and more jagged and snowbound mountains in the distance marked our transition from the high Finnish plateau into Norway. 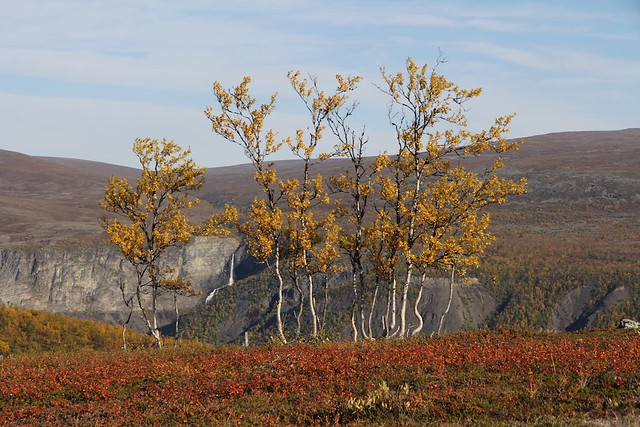 It wasn’t long before we could see a giant cleft in the landscape in the distance – the Reisandalen – the valley to which we were headed.   As we gradually descended the reindeer became more plentiful and the birch grew higher. 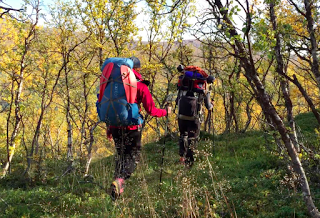 The final few kilometres saw us dropping lots of height through steep wooded slopes – quite a challenge with the packs and paddles – until we caught sight of the river below us, glinting in the sun.

We stopped above the waterfall at Imofossen before joining a small path – the first sign of a human touch for several days – until we reached the hut at Nedrefosshytta.

Perched below the hut and beside the river was a separate little building – the sauna.  We enjoyed a long relaxing soak, washing out the exertions of the past few days.   The hut was well equipped – and empty – we filled out forms to allow them to charge us via credit-card.  As night fell well I was conscious that we had yet to see the Northern Lights on our trip.  The evenings had been too cloudy and I’d already discounted the chance of us seeing them.  Glancing out of the window at around 2130 we thought we could see something.   Stepping outside into the darkness, the unmistakable sight of the aurora was above us.   We were treated to a glorious show of iridescence  as the aurora danced and jigged around a star-filled sky. 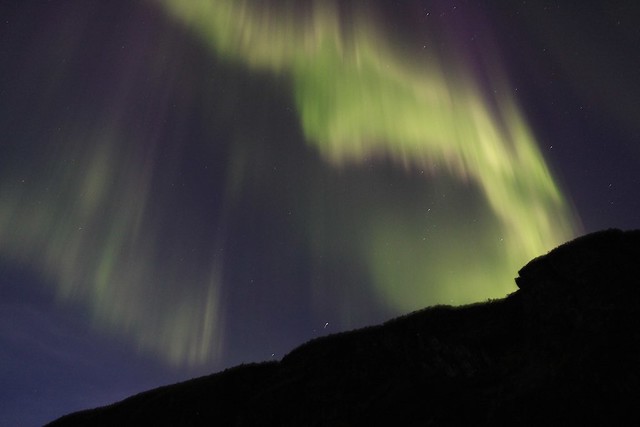 This was planned as a partial rest day. Ali lounged in the hut while Jaakko and I disinfected the packrafts – a necessity when crossing the watershed to prevent a known disease spreading to the salmon.   I fancied having some fun in the white water further upstream so we walked a few kilometres up with our rafts and jumped into have some fun.  It was all over all to quickly but enough to whet my appetite for more – the Alpackaraft being so buoyant and manoeuvrable. 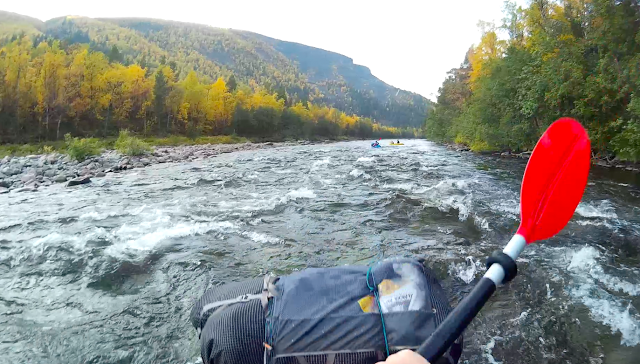 After lunch we packed up, strapped our packs to the rafts and set off, the plan being to descend 6 or 7km downstream to find a camp spot for the evening.  We were immediately into faster water, dodging the boulders that hid under the waves.  Eventually we made shore on a gravel bar to check out a visible flat campspot on what was a small island. 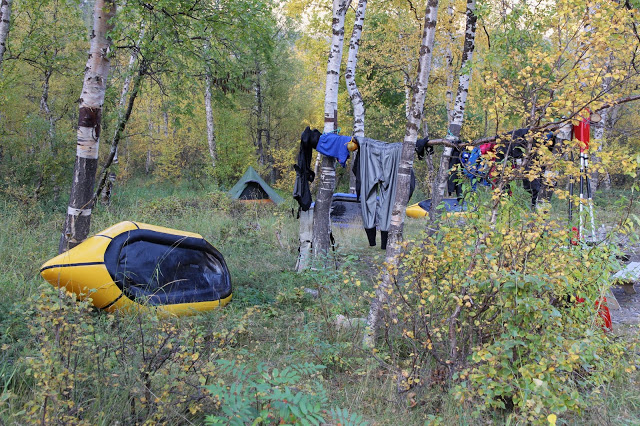 The clear sky above hinted at a chillier night ahead so we gathered some fire-wood and Jaakko demonstrated his survival and fire-lighting skills by….using a lighter!  In reality the damp wood made it quite a challenge to keep it lit but perseverance brought us a roaring flame providing the perfect back-drop for another aurora display. 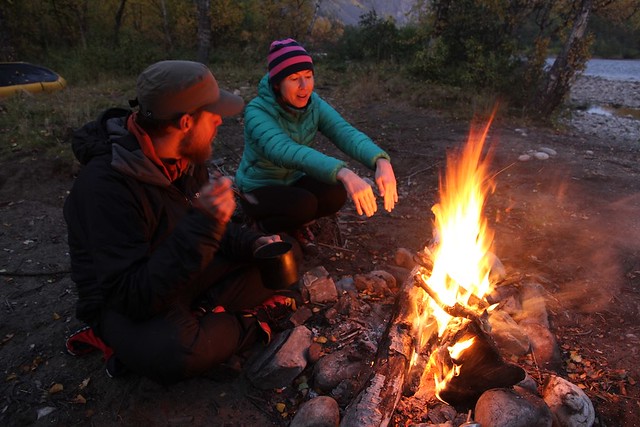 The alarm woke us at 6am and we were on the water by 7.30.  With the clear blue sky and quiet waters it would have been easy to just drift along without a care in the world, but we had a long stretch ahead of us to meet our organised lift by mid-afternoon. 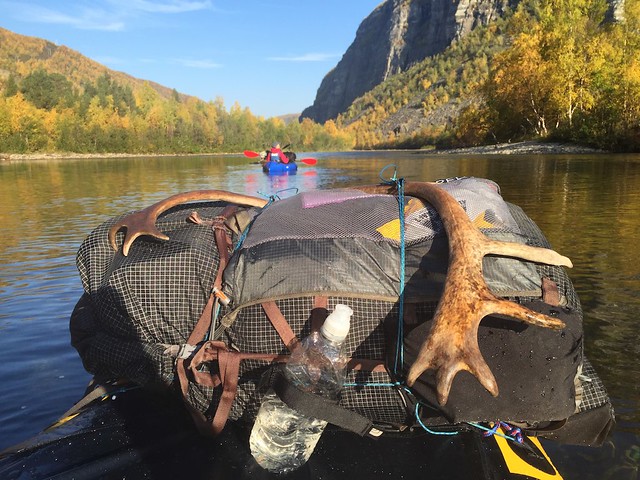 The canyon sides soared above us, punctuated by the odd waterfall cascading down.  Suddenly, an eagle dropped from the cliff above, swooped down in front of us and headed off downstream – such a magical moment on what would be our final day. 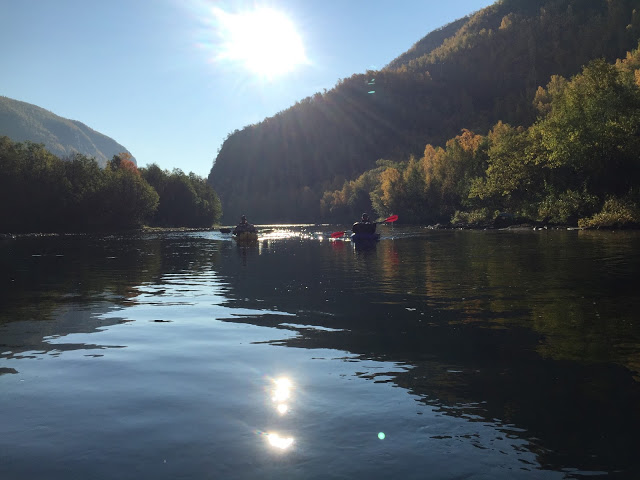 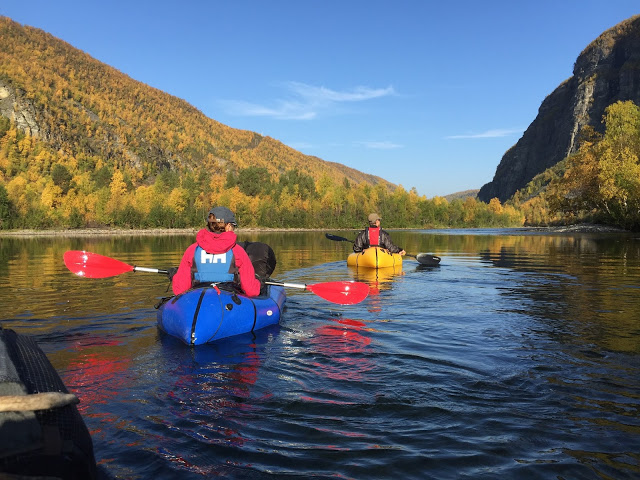 We continued downstream, the deeper stretches interspersed with faster rocky shallows as the river lost height  We stopped to admire a huge waterfall and then after a few more kilometres we came across the first narrow boats that are used by fisherman and day-trippers.  Shortly afterwards we spied a couple of hikers on the feint path by the river – they were heading up to the hut we’d stayed the night before – the first people we’d seen for almost 5 days! 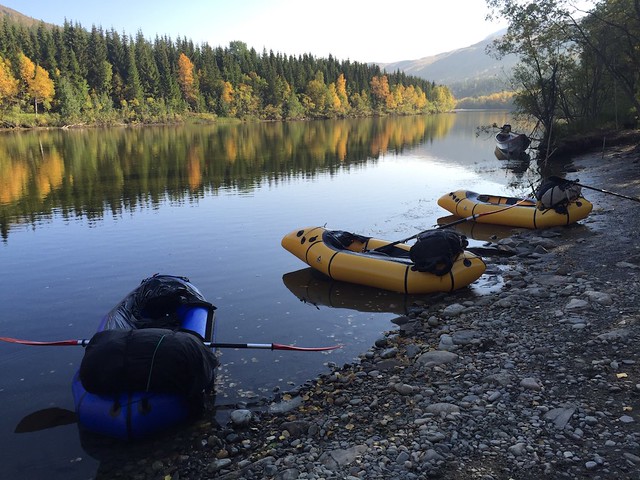 As we meandered downstream the river grew wider and deeper, but ever crystal-clear.  We were gradually easing back into civilisation, with the odd hut and river-boat becoming more apparent, until eventually we reached a small car-park that marked the trail-head.  Shortly thereafter we paddled past a house – first human dwelling for 7 days – before rounding another bend where we were greeted by a smiling Timo, our lift.  We’d done it – we’d survived the wilderness and had a great time to boot! We still had a 3-hour car journey winding along the Norwegian coast to return to Kilpisjarvi.  The scenery was stunning…..but I fell asleep with a smile on my face.

It had been a fantastic seven days off the beaten trail. Tough going in parts, the most weight I’d carried for a sustained time, but the packrafts added an extra dimension to the trip making the weight worthwhile.

A big thanks to @korpijaakko for helping/guiding and generally putting up with us!  Compared to his usual Arctic guiding this was a walk in the park for Jaakko.  With two people pulling out he could easily have cancelled this trip but his knowledge, humour, patience and company was a pleasure..even if Ali would suggest there was just a little too much gear talk between us!