My blog has been somewhat neglected for the past few months – a combination of winter lethargy and personal ‘stuff’ to deal with, though I’ve continued to keep a watching eye on others travels and musings.

I’ve also been spending more time indoor climbing – usually at Westway in London or Craggy Island in Guildford.  My regular climbing buddies I met by chance on the Snowdon Horseshoe last summer, though I’ve since introduced another friend who was instantly hooked.  Of course indoor climbing is no substitute for the mountains but the combination of accessibility, challenge, fitness together with a great social vibe means that indoor climbing seems to be really growing in popularity.  Going regularly is the key with noticeable improvement in balance, strength and movement helping me push the grades – though I have a long way to go!

I also took advantage of Go Outdoors crazy, one-day only, 50% discount on climbing gear sale in January and picked up some trad climbing gear (a 50m rope, a set of Wild Country Rockcentrics and a set of hex’s) as well as a pair of Grivel Matrix Light axe’s.

After all the heavy snow in December I was looking forward to some proper winter walking with crampons and axe at the ready but the snow had all but disappeared as I arrived in Snowdonia at New Year.  I spent a relaxing few days in a cottage in Nant Gwynant by the start of the Watkin Path and enjoyed a chilly and icy ascent of Yr Aran, with Snowdon looking majestic under a dusting of snow. 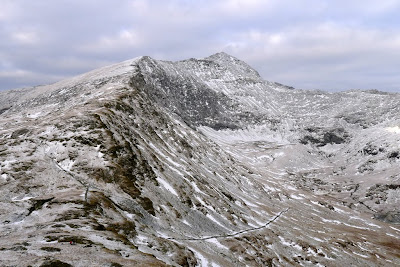 Plans for this year?  Well, I hope to get up to Scotland before the winter’s out and also plan on some more rock climbing on the real stuff this year.  I’m looking forward to translating my improvement in balance and movement to the mountains and doing some more scrambling this year,  as well as fitting in some weekend wild-camps.  I must also try to avoid the M54 turning on the M6 and head up to the Lakes more often!  Mont Blanc is a definite target for the summer, most likely early September if the weather will hold like last year.  And of course tending to my neglected blog.

Looking forward to the rest of 2011 and may be meeting up with some of you this year.