I should have been summiting Mount Triglav in Slovenia. Flights were booked, the route planned and huts contacted some months back but misfortune afflicted my travel companions – one was advised by his doctor not to go lest disrupt his ankle rehabilitation and the other fell foul of a hernia the week before.

At a loose end I made a last minute decision to head to the Lake District for a 2-day hike/wild-camp. For reasons unknown, but more likely the M6 traffic, I had yet to explore much of the Lakes, favouring the shorter hop to Snowdonia than the lottery of the M6 north.

Pouring over maps, and finding the OS Getamap tool surprisingly useful for route planning, I considered a linear north-south traverse of the Lakes but the limited public transport to get back to my car on a Sunday pushed me to looking at a circular route.

Leaving London on Friday morning I pulled into Keswick six hours later to pick up some last minute provisions and then headed down past Derwent Water to Rosthwaite where I would leave the car.   My first nights camp was to be on Thuncar Knott.  Low cloud obscured the fells and a short shower reminded me of the folly of stashing waterproofs at the bottom of my pack as I followed the Cumbria Way up towards Stonethwaite.  To the right I could see the start of Langstrath but my route kept me left, following Greenup Gill up to the head of the valley.

The route steepened as I reached onto Greenup edge and the broad col between Ullascarf and High Raise. Crossing boggy ground I headed right and pulled up onto the summit of High Raise.  Heading further south the path dropped gradually before rising again to the rather indistinct Thunacar Knott.  I was looking for the summit tarn by which to camp but I was on a path slightly left of the one marked on the map ended up being distracted by exploring a number of small pools above Pavey Ark. Eventually I headed back up to the true summit and found the small tarn I was searching for, and the one small flat and dry patch on which to pitch the Hex Peak.  I’ve gotten the hang of pitching it and the inner now. 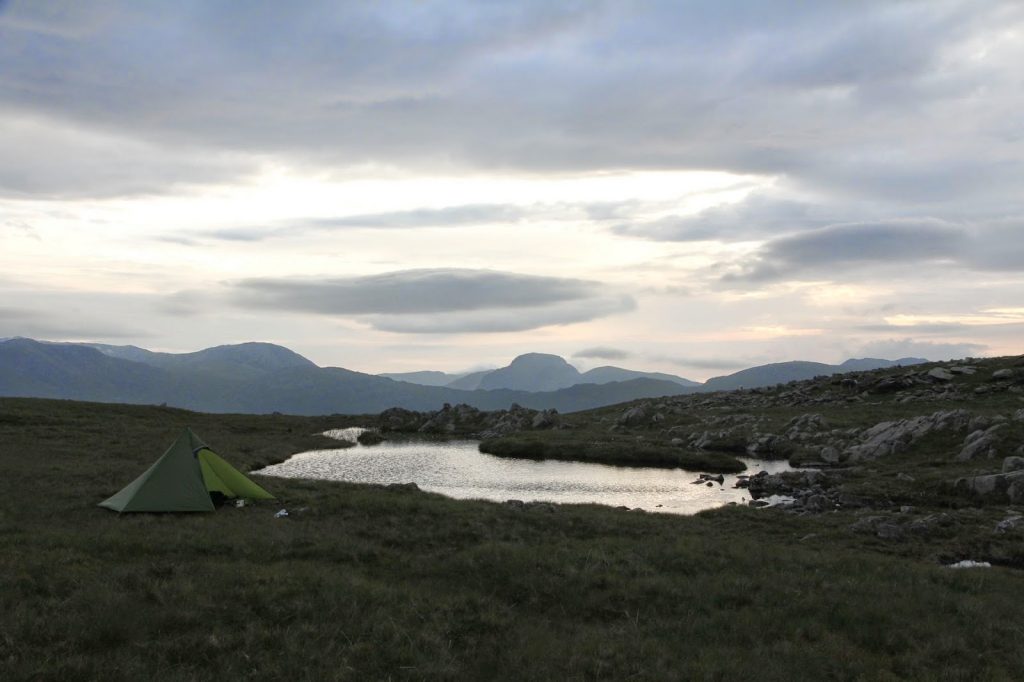 By the tarn on Thunacar Knott summit

The sun was starting to break through the cloud, hinting a colourful sunset so after a rather delicious dinner I sat against the summit cairn to watch the sun go down. 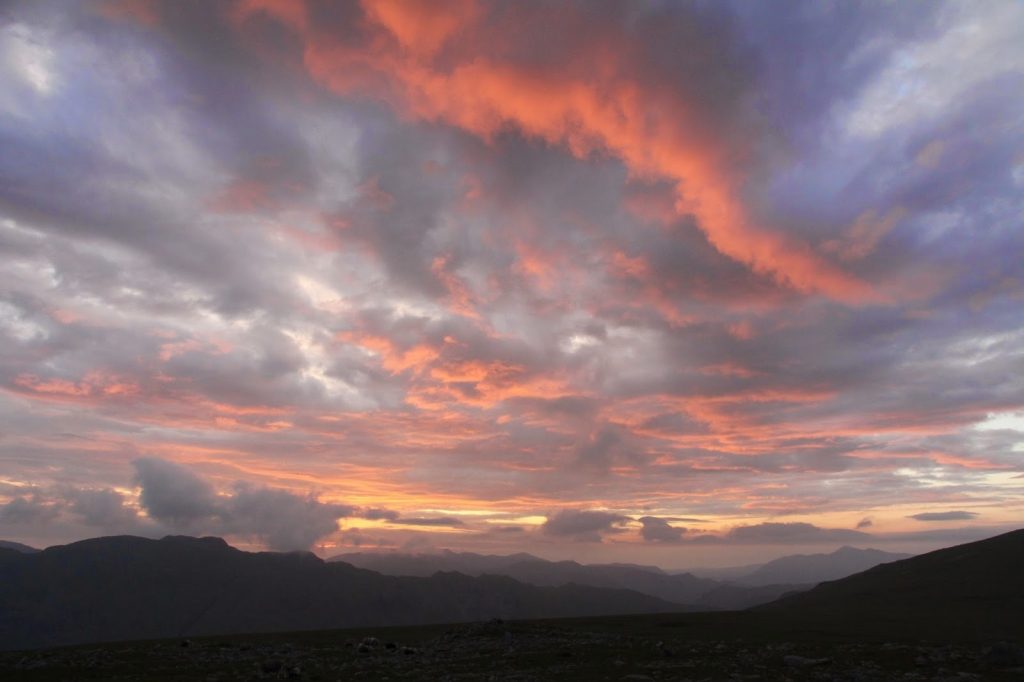 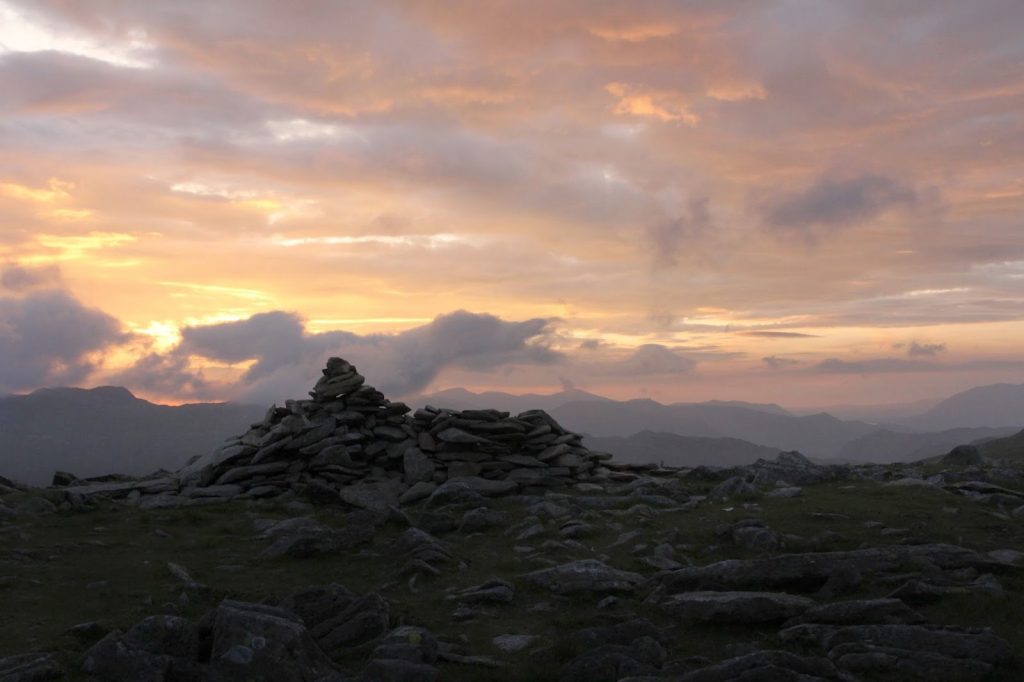 Sunset behind the summit cairn

The next morning the sun was out as I struck camp and headed west, dropping down to Stake Pass following the path round and up to Angle Tarn, nestled below Bowfell. 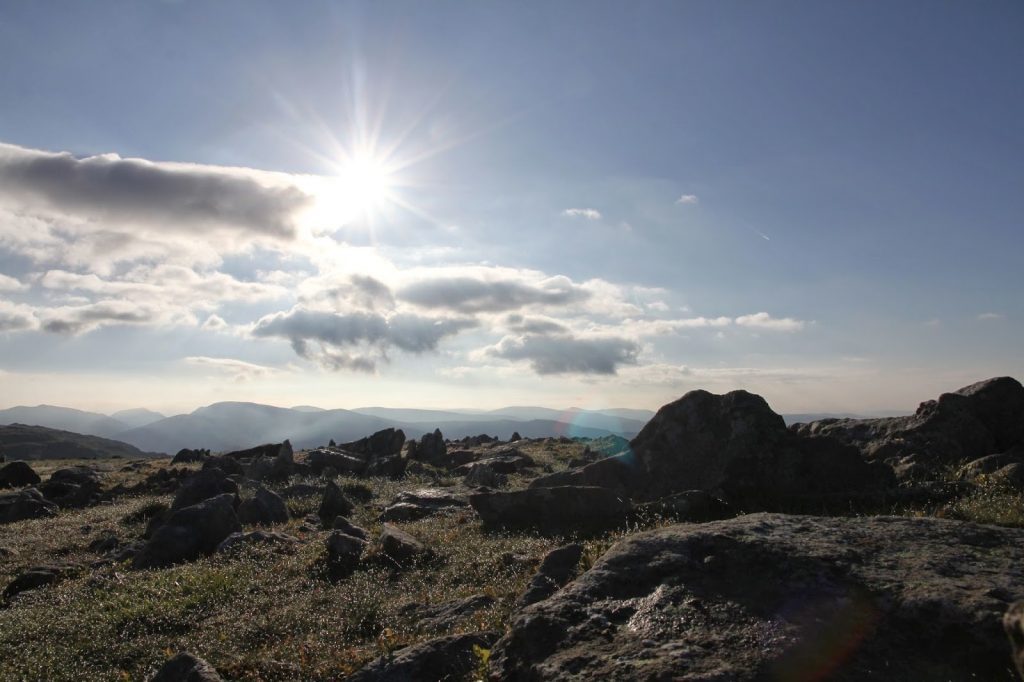 By Angle Tarn I turned right towards Esk Hause, stopping by the stone shelter lower down for a mid-morning snack.  I decided to quickly nip up to the summit of Allen Crags where a 360 degree view meant it felt I was truly at the heart of the Lakes.

Dropping back down to Eask Hause I headed down past Sprinkling Tarn, nodding politely to the day-trippers on their slog up to Scafell Pike.  The cloud was closing in on the peaks as I reached Sty Head where I stopped to consider my route.  I planned to head over Green Gable and Brandreth towards Honister, so I could choose either the direct route up Great Gable, or drop down to Styhead Tarn and then ascend Aaron Slack to Windy Gap. The latter would save me around 100m of ascent but I decided to head straight up Great Gable where the poles were a god-send on the slog-up.  Visibility worsened as I gained height and I reached a cold damp and grey summit.  I took a bearing to head down to Windy Gap, taking care on the steep descent.  A quick haul up to Green Gable and I was soon heading down and up again to reach Brandreth.  Rain and cloud meant following a bearing north to Grey Knotts, with my thoughts drifting to the prospect of tea and cake at the Honister Mine cafe.

Dropping down off Grey Knotts visibility returned.  The descent was taking its toll on my knees and feet dampening enthusiasm for the looming prospect of heading up Dale Head across the pass. Thankfully the cafe was still open as I reached it before 5pm.  In a moment of weakness I considered heading down the valley to find a campsite and a pub in which to watch England vs Italy match, but re-energised by tea and cake I headed straight up the flank of Dale Head.   Using the altimeter on my Suunto Core watch I veered right at around 600m heading towards Dale Head tarn.  As it came into view I could see the tarn was occupied by another couple of tents so I kept right heading to the higher Launchy Tarn.  Exploring more boggy ground I opted for a higher mound away from the tarn which also afforded wide views across to the central fells. 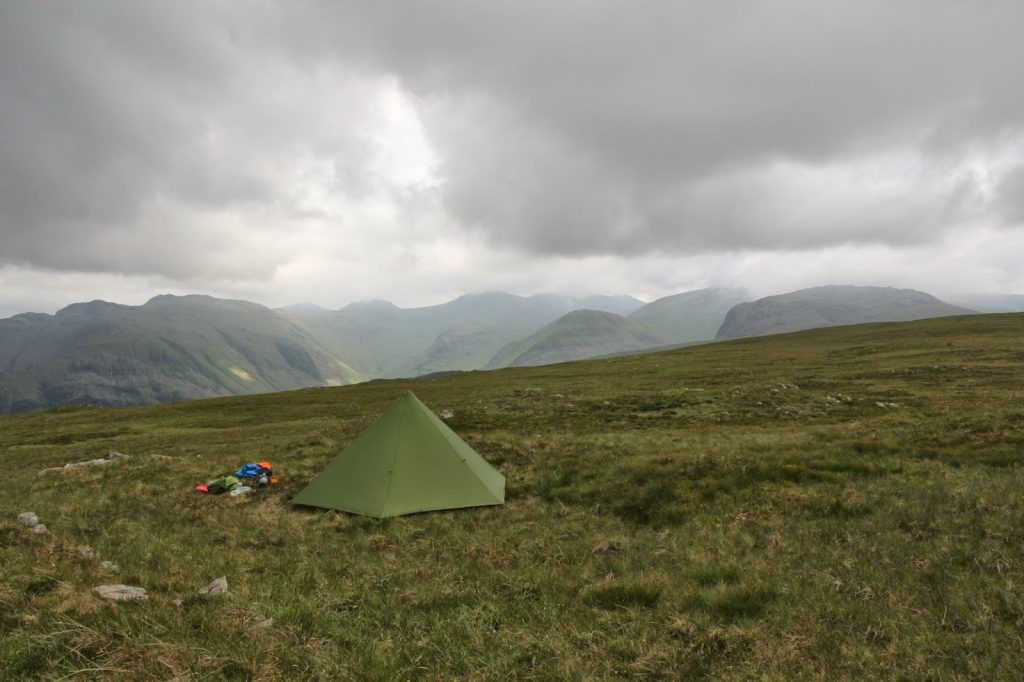 I decided not to pitch the inner on the Hex Peak and see how I got on, using the inner as a ground sheet on which to plonk the NeoAir and my sleeping bag.  The first thing I noticed was how much space I suddenly had. The next thing I noticed were the midges!  Closing the door to stop the midges meant losing the view but a heavy shower mean the view disappeared anyway so I spent 20 minutes stalking the midges one by one.

The next morning, rather than drop straight down to Roswthwaite I headed up to High Spy and its impressive summit cairn. Visibility dropped once again and I resorted to compass and pacing in order not to miss the path east, dropping down to the small hamlet of Grange. A pleasant jaunt along the Derwent took me back to Rosthwaite and the car.

Re-tracing my route back at home, for the first time I felt I had grip on the Lakes. I still have plenty to explore but I’ve finally found my feet and my bearings.

One Reply to “A Lakeland Escape”