This years mountain weekend was a little further afield, aiming to summit Mount Toubkal, the highest peak in North Africa at 4,167m.  Eminently doable in a long weekend we flew to Marrakesh and immediately took a taxi to the village of Imlil in the foothills of the Atlas Mountains.

The next morning we set off on the long haul up to Refuge Camping du Toubkal des Mouflons where we’d booked beds for the evening.  We set off for the summit before sunrise, negotiating the odd snow-field without resorting to crampons and after a few breaks arrived at the summit around 3 hours later. After admiring the stunning views we descended back down to the refuge for a spot of lunch and then continued back down to Imlil for a well earned tagine. 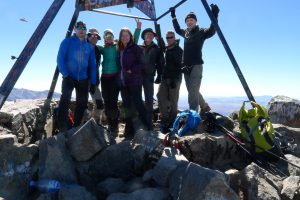