After the trials and tribulations of the past 4 years I had been itching to get up to Snowdonia and get out into the mountains for sometime. Reading others blogs had given me the motivation and inspiration to make a real effort in 2009.

In my sights was Moel Siabod which I remember was the first real mountain I saw as a child. Travelling though Betws-y-coed on holiday with my parents, I remember looking up in awe at this huge mountain rising above us. Our AA road atlas at the time included the names of some of the major peaks and so the name of Moel Siabod was etched into my mind at the age of 11.

It was a beautifully clear, crisp winters day with plenty of surface frost, though I didn’t really need to take my Xmas present from my wife Michelle – a Black Diamond Raven Pro ice-axe (that’s the present not my wife!). Joining Michelle and I was my sister and her fella Dan, neither of whom has ever done any walking but had kitted themselves with the basics a few days earlier. We climbed up from Pont Cyfyng, stopping every 10 mins to stare at the ever expanding view – you just know the photo you’ve just taken will be superseded by an even better view a little higher up. We passed to the right of Lyn Foel where the mountain opens up and the ridge of Daear Ddu fills the skyline up to the summit. As we reached the saddle where we would start our ascent of the ridge you could just pick out Dolwyddelan Castle through the mist down in the valley to the south. As we climbed Daear Ddu it was evident there was more fun to be had on the top of the ridge but we kept to the south side, encouraging my sister as she clambered up the boulders. As ever the summit seems to appear out of no-where and the were ethereal with distant peaks breaking through the low-cloud. 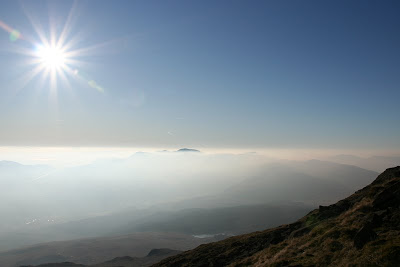 A quick lunch stop huddled behind some rocks for shelter allowed us to re-fuel. Only when you stopped moving did you realise how bitterly cold it was. The descent down was rather precarious due to the solid ice on the path but we picked our way down carefully, eventually re-joining the path back-down to Pont Cyfyng and the car. Over a pint, Dan confessed he’d been bitten – I’m not sure how my ‘sis will take to being dragged out by him on wet and windy Sunday morning!!

One Reply to “Mountains at last!”