We were joined at New Year by Carl and Paula at New Year – another couple of newbies who we had helped kit out a day earlier. After a later than planned start I decided we would head up on to the Glyders from the south-east, parking on the A498 by the Pen-y-Gwryd Hotel. It was a steep slog up from the road, avoiding the precariously frozen path and eventually joining the old miners track. ‘Is that the top?’ was Paula’s continued query each time we approached a crest, only for her to realise there was another higher one behind it. Reaching the ridge we had fantastic views of Tryfan in front of us. It reminded us of our ascent on a scrambling course in 2005 – yet it looked more severe from this angle. You could just make out people standing on Adam and Eve, the two summit boulders. We could also see Bristly Ridge in profile and picked out a small party making their way up, whom we later met at the summit. More hands on action up the last few hundred feet, past the odd smattering of broken snow, brought us to the top, adjacent to where Bristly Ridge joined the summit plateau. A saunter across the shattered rock, past the ‘cantilever’ brought us to the summit of Glyder Fach. Well almsot as standing on the actual summit involves picking your way up the final few boulders, legs and arms wedged in cracks, hustling yourself up that final few feet. The top of the Glyders is an eerie place, with huge bolders and shattered rock, looking as though they are the remnants of a giant game of Jenga. No visit to Glyder Fach is complete without the obligatory photo on the gravity-defying Cantilever. Michelle gingerly inched her way across it, convinced it would tip. After a lunch stop to admire the views we made our way back down the same route, Paul surpisingly admitting she had enjoyed herself. Carl may have been bitten but I wasn’t too sure about Paula. 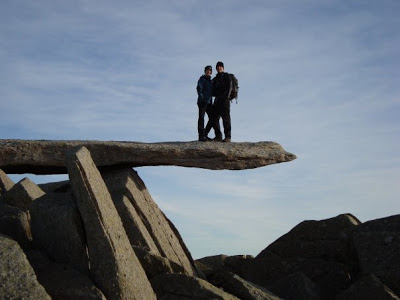 The next day while Paula rested her aching limbs, Carl and I ventured out with the aim of climbing Cnicht, sometimes known as the welsh Matterhorn, in lieu of its shapely profile, i.e. it looks like a ‘proper’ mountain whe viewed from the south-west. Parking in the small hamlet of Croesor we headed N-W for a few hundred yards before picking up the start of Cnichts south-west ridge. It’s from this angle that the peak is at its most impressive – looking directly up it always looks steeper than it real is, with Carl suddenly concerned about his fear of heights.

We could just about pick out other bodies clawing their way up the final few hundred feet to the summit. As we climbed higher the ridge narrowed and steepened, with drops to the east. Plenty of handholds offered extra comfort over the final 50m. When you arrive you find what appears as a real conical summit from the south-west is actually the start of a longer ridge which gradually drops north-east, eventually leading to the head of the valley.

The wind picked up as we traversed the ridge to the end Cwm Croesor and a quick map/compass check saw us head right at Llyn yr Adar, heading south-east, to the left of Llynau Diffwys and dropping further to reach the disused quarry buildings. Time was pressing after our late start and slightly unsure whether we should have picked up a different path we re-traced our steps slightly down Bwlch y Rhosydd, and then dropped of the main of the main track to join a path which clung to the south side of the valley, dropping gradually as it made its way back down to the Croesor.