Facebook Twitter Email Flickr Vimeo Link
As a belated Xmas present Michelle arranged a winter skills day in North Wales. We’d considered going up to Scotland where the ‘winter’ bit was more certain but the logistics for a quick weekend were against us. After a few emails back and forth with Gareth at Sea2Summit we were assured there was some snow high up and the prospect of more at the weekend. A late drive up on the Friday night saw us arrive at Ty Gwyn pub cum B&B on the A5, just west of Betws-y-coed. We’d arranged to meet Gareth and Richard, our guide for the day, at the Pinnacle Cafe in Capel Curig at 0900. Rich had checked the weather reports and with the prospect of 80 mph winds forecast wasn’t too hopeful even though there was snow high up the Ogwen Valley. We headed along the A5 past Tryfan and parked up opposite Llyn Ogwen. The plan was to head up to Cwn Cneifon or the ‘nameless’ cwm, which was still holding snow on its north-facing flanks.
It was a bit of a slog up from Idwal Cottage but our new year outing at least gave us a modicum of hill fitness, despite the extra weight of the fully-rigid boots being noticable with each step. On reaching the shore of Llyn Idwal we continued south, within full view of Devils Kitchen, climbing below and around Sub Cneifon Rib until we reached the first few snow patches. Here we had our first practise of kicking steps and using the ice-axe for balance and security. Heading further up we soon reached the base of Cwm Cneifon where we stopped for lunch. It was bitterly cold and Rich, thankfully, had a couple of spare insulated jackets. He also pulled out a bothy shelter – I’d seen them advertised but never seen anyone use one but once huddled inside I was amazed how cozy, yet light and airy we were, secure from the cold and wind. Michelle has already added one to the shopping list. After lunch it was on with the crampons, getting used to the John Wayne gait necessary to prevent catching your trousers (I failed miserably and now have holes in my waterproofs!) and practicing ice-ace arrests. 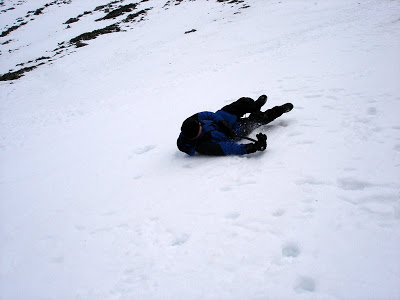 Throwing ourselves downhill in varying forms using the ice-axe for arrest was great fun! It was now 3pm and I fully expected us to be heading down, so it was with great surprise that Rich said we were going to head up the cwm to the summit. As we headed upward, kicking pigeon-toed into the snow, the slope gradually steepened. We didn’t really notice as we plodded on feeling quite secure.

Kick, kick, plunge was the rhythm. About half way we stopped for a breather and only on looking across the slope did we realise how steep it was getting. Rich got out a rope and passed slings around the odd rock spike and as he lead we had the benefit of using his footholds. We soon reached the summit, clambering over the solid cornice, whilst secure on the rope. 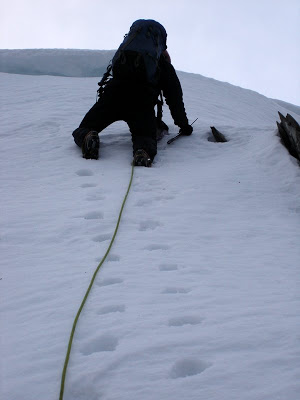 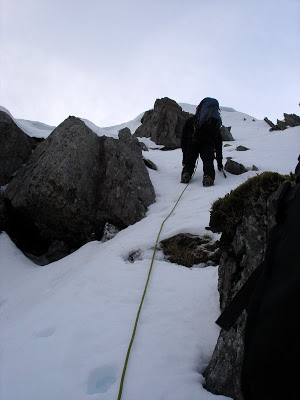 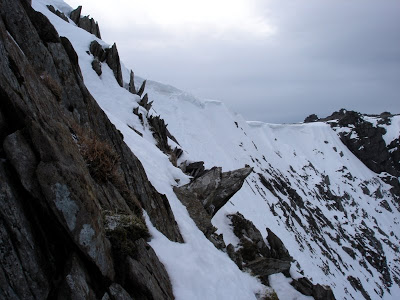 As our heads popped over the top a few walkers could be seen to be thinking “where’d they come from?” 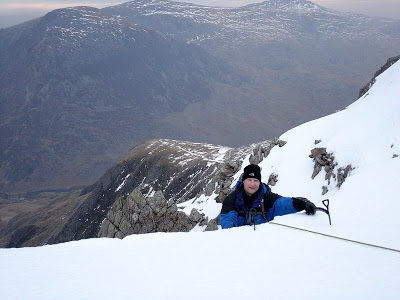 By now it was still light but getting a little later than planned. After a quick cuppa we headed over to the top of Y Gribin, the narrow scrambly ridge that heads down from between Glyder Fach and Fawr. Its classed as a grade 1 scramble in summer and the top is quite narrow and exposed, yet the snow and ice added an extra dimension, so it was out with the rope for additional secuirty. We gradually picked our way down, threading through and around the snow and ice – thankful to have ice-axes in hand and rope on waist through a few sections. The gradient eased and we were over the worst bits as the light gradually faded so it was head-torches on as we made our way down to Llyn Bochlywd in the dark. We weren’t the last off the mountain as I could see other head-torches making their way down from Cwm Idwal as we approached Idwal Cottage and the warmth of the car. 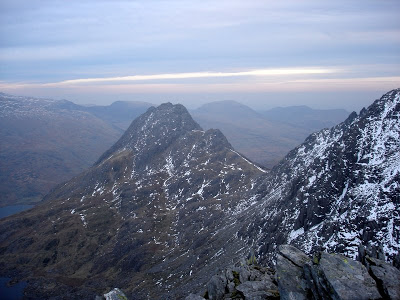 We’d both had a fantastic day out and done much more than we’d imagined. We felt a real sense of achievement having put our skills to use reaching the summit and would like to express thanks to Rich our guide. We were at home on Monday was when I heard that two brothers had fallen to their deaths on Snowdon that same weekend – a sobering reminder of the risks of mountains in winter. I’d picked up a leaflet showing some of the danger spots in winter – it showed a picture of the top of the Snowdon Pyg Track in summer and the same spot in winter conditions – almost unrecognisable. I’m glad that we’d taken the opportunity to learn some winter skills but you can never be complacent. Be prepared and then be prepared to turn back would seem apt – the mountains will always be there for another day.