Facebook Twitter Email Flickr Vimeo Link
The trudge up north on a Friday evening is never much fun and we finally arrived at Betws-y-Coed around 9.30pm, grabbed a bite to eat then headed further along the A5 to the trusty Dolgam campsite, pitching in the dark and in the rain. The forecast for Saturday was much better. With no wildcamp scheduled, the plan was for some unencumbered scrambling, with Bristly Ridge the objective.
After a quick breakfast in Pinnacle Cafe (of miserable staff fame!!) we set off towards Milestone Buttress at the base of Tryfan and headed left toward the north ridge. It was fairly busy as befits a summer weekend but my last outing had given me more confidence to try the not so obvious lines and make it more interesting.

For the second time I scaled the Cannon Stone only for camera gremlins to deny the proof – thats Michelle in the pic above, not me! The rest of the north face was largely uneventful apart with no real difficulties apart from my shoulder playing up again. Lunch at the summit of Tryfan is never a solitary affair, more like Clapham Junction at rush-hour. 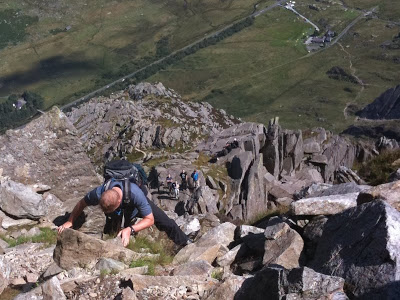 Descending to the south summit you had a great view of Bristly Ridge directly ahead. I stopped a few times to see if I could see the obvious line of the starting gully. Down to Bwylch Tryfan we then followed the wall up towards the base of Bristly Ridge and were joined by another couple who proudly anounced they had ‘done’ Bristly Ridge 26 years ago! The first gully, blocked by fallen boulders was easily scaled on the right, then a quick move right brought us to a more imposing looking gully (I’m not sure but it may be called Sinister Gully?). The older couple duly pulled out helmets of their packs and suddenly looked rather well-prepared! 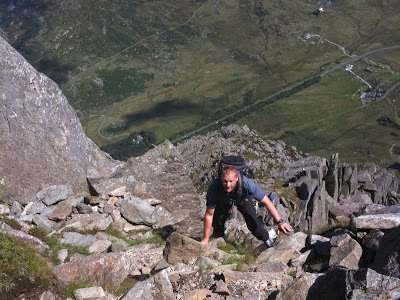 We were comforted(?) that we were in the correct gully when another party joined us……either that or they had made the cardinal sin of following people who didn’t know where they were going!! Looking up the gully it was pretty vertical but soon appeared to ease-off and as ever in the Glyders a comforting handhold/foothold was only a stretch away.
Keeping near the ridge the scrambling was cleaner than Tryfan, with a greater feeling of exposure coming with an ever-narrowing ridge. The pinnacles added interest with the first pinnacle was flanked to the right. We had to chuckle when looking back when the leader of the following party was scrambling directly up the pinnacle. ‘Yes, it’s ok…yes..yes…………..noooooo!” he declared as he popped his head over the lip, peered down into gap and hastily retreated.
Great Pinnacle Gap (seen as the obvious notch in the right-hand ridge line in the photo’s below) was fairly obvious when reached and I could now see first hand the view that I’d only previous seen from afar. A nervy down-climb to the left was easier than it first seemed, followed by a shuffle down directly into the gap. The main pinnacle was flanked to the right and we then ascended a steep gully leading back up onto the ridge. Thereafter the scrambling was pretty non-stop till the ridge joined Glyder Fach summit.
With new-found confidence I tackled Castell y Gwynant head-on and climbed directly up and over the pinnacles, before we headed over towards the top of Y Gribin ridge, the usual descent route of the Bochlywd Horseshoe route. Todays descent of Y Gribin was a little less precarious than the last time, which was during Winter Skills training in January, when the combination of snow/ice/crampons/rope/darkness all added to the fun! 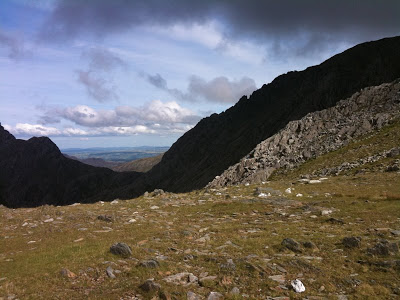 The route did offer a great profile view of our mornings ascent but I was disappointed to find the route being more loose rock and scree, rather than scrambling and with sore knee’s it turned into a real trudge on the descent to Llyn Bochlwlyd from where we headed north back down to the A5. Bristly Ridge done – a great day out and a real-sense of achievement! 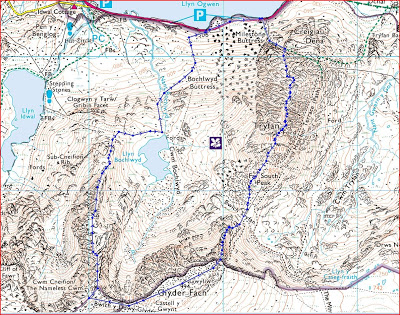