Facebook Twitter Email Flickr Vimeo Link
Better late than never (I hope!). I’ve been meaning to write-up a few recent trips but Xmas and New Year is a such a busy time!
After my last swine-flu aborted trip I was determined to fit in a quick weekend before Xmas. With the a wet November giving way to a cold and crisp December my iphone weather app was showing five clear rain-free days so I chucked all my gear in the boot of the car and headed up to Snowdonia. I was still unsure whether to stay on a camp-site and do a couple of day walks/scrambles or brave a winter wildcamp. After a quick cuppa in the Pinnacle Cafe in Capel Curig I decided on a wildcamp and set about packing my OMM Villain….and un-packing it…and packing it again as I rummaged around the jumble of gear and clothing in my boot. I had a loose idea of heading N-W from Capel Curig up the flank opf Pen Llithrig y Wrach and then onwards either to Melynllyn reservoir or Llyn Eigau.

Looking back into Cwm Eigau
Heading off along the A5 I crossed the stile and headed north up towards Llyn Colwyd. The map showed it was about 7km to Llyn Eigau and since it was already almost 3pm I knew I’d have to get a move on before the light faded. The ground was sodden which made it hard going and I quickly found my feet and socks soaked, having stuck with my TNF Hedgehogs rather than switch to boots. Upon reaching the southern tip of Llyn Colwyd I continued up and N-W aiming for Bwlch y Tri Marchog, a small pass where I could then drop down into Cwm Eigiau. The cluster of contours made the drop look pretty steep on the map and on reaching the top in fading light and with cloud closing in I felt I was standing on the top of a black-run as the ground fell-away! Melynllyn was now well out of the question and whether I would be able to reach Llyn Eigiau without torch-light was questionable, so out came the Petzl Tikka in readiness. I picked my way down the mountainside, slipping a few times on the sodden grass and rock to eventually reach the valley floor some 700 feet below. The sun was well behind the imposing cliffs of Cwm Eigau and my trek was hampered by the boggy ground and a patch-work of streams, some of which I had to backtrack and detour around. My head-torch seemed overwhelmed in the vastness as I searched around near the lake for a suitably flat and relatively dry spot to camp. My definition of dry quickly changed to ‘without running water’ and flat changed to ‘looks flat in the dark, by torchlight’ as the tussocks of grass meant several unshapely mounds underneath the floor of the tent.

I pitched by torchlight and un-packed – that awkward time when you realise what you have and what you have forgotten. No spare socks!! My feet were sodden – I took off my socks and wrung them out and wrapped my feet in my sleeping bag. I was resigned to the fact that I’d be putting on wet-socks in the morning. A quick cup-a-soup restored morale as I organised my tent for the evening ahead – nights are long in the winter.

I was tempted to go for a wander but the thought of donning wet-socks persuaded me otherwise. One luxury I had packed at the last minute was my down-jacket, which although a little bulky was a god-send. I was looking forward to my Mountain House pasta and bolognaise and had just added the boiling water when upon reaching for the spoon to stir I dropped the bag, spilling the contents over my lower leg, bare ankle and trainer. Luckily the spill was in the porch but as I had earlier removed my socks the boiling water scalded my ankle, not to mention the rather awful mess and that my hot dinner was no more. I laughed at the ridiculous mess, cleared it up as best I could and resigned myself to another cup-a-soup and some chocolate.

The sky was clear and cold but as the night wore on I could feel the damp air permeating my down jacket and sleeping bag with the down loft gradually subsiding. The night was peaceful and I was warm enough but my wet socks were half frozen by morning. After a hearty pot of porridge I broke camp around 9am and headed back up into Cwm Eigau. 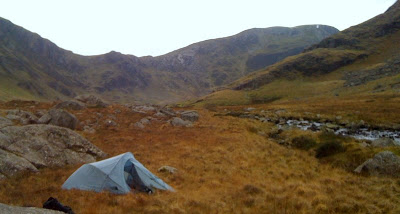 Looking back up to Bwlych y tri Marchog and Pen yr Helgi Du in the morning
I had worked out a route of about 20km to take me back to Capel Curig. I’m still getting to know the Carneddau, picking them off piece by piece, but their scale and bulk still surprises me each time. As I reached old mining ruins near the head of the cwm the path headed north and up the side of Gledrffordd. As I trudged upwards with increasing effort the cloud starting descending and the first few flakes of snow appeared in the air. As I neared the top of Gledrffordd I just had time to do a quick check of my location by compass before visibility fell to around 200 yards and the snow and wind became stronger. I set a bearing for the N-W shoulder and trudged across the strange landscape, counting paces for around a kilometer. I was pleased with myself when I reached a wall I’d spied on the map as a handrail – who needs GPS!?! The path dropped slowly down and around Clogwynyreryr and then I headed south to the dam on Llyn Eigau for lunch. 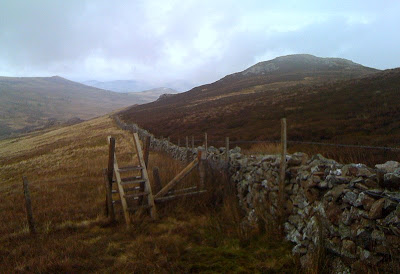 Re-fuelled I headed south-east up Hafod y Rhiw I picked my way around numerous rocky outcrops, each time expecting to see Llyn Cowlyd, but each time being dissappointed. It was a strange sesnation knowing where I was – yet I wasn’t quite sure! I was a little annoyed at myself, particularly as I’d managed so well the day before, but I’d underestimated the distance on the map. And then I lost my compass – I kept thinking I ought to tie it on somewhere but was content to loop it around my wrist. The sun was breaking through so I’d taken off my gloves and I’m always conscious that if you’re carrying more than one thing in a hand, its easy to drop something without noticing – and so I did!!

Luckily I knew that I wasn’t far from the lake and the route back was straightforward. Looking back west I could see snow settling on the high ground of Carnedd Llewelyn and five minutes later Llyn Cowlyd reservoir thankfully came into view. It was a long trudge along the shore of the lake which is 3km long but on reaching its southern tip there remained only a steady route back down into Capel Curig. I hadn’t seen a soul for 24 hours!

Snow settling on the high ground of Carnedd Llewelyn in the distance
My first winter wild-camp, a few lessons learned (some the hard way!) and more experience gained – all from an un-planned quick trip! What more could I ask?