With my new Laser Comp having just arrived I just had to fit in a quick trip, so I headed up to Wales on Friday afternoon.  I hadn’t planned and therefore packed in a hurry, which I would regret later!.  I had thought about heading into the back of Carneddau and camping by Melynllyn but I decided to head somewhere new. I’d always liked the idea of the area of the Moelwyns bounded by Cnicht to the south and Moel Siabod to the north, west of the A498 and the Snowdon range.  It has a raw and remote feel to it and I’d spotted a few liitle lakes the last time i climbed Cnicht.  I headed down the A498 past Snowdon and parked in NantGwynant.  A quick check of the map and I selected Llyn Edno as a suitable destination for the evening. Setting off at 5pm I guessed it would be a couple of hours at the most.  Heading up the single track road for a couple of km’s i turned left by Haodydd Brithion and started ascending. The reduced weight and size of my pack was noticeable though i still found it a bit of a slog upwards.  I veered of the main path to take a more direct but steeper route, having to use map and compass to keep orientated with no obvious peaks as reference. The pathless heather and rocky outcrops reminded me of the a milder version of the Rhinogs.  I headed up to Clogwyn Drain where the land levelled out a bit, continuing NE to reach the shores of a deserted Llyn Edno, with Moel Siabod sitting directly in view across the lake.  A quick scout around and I found a good camp spot at the south end. 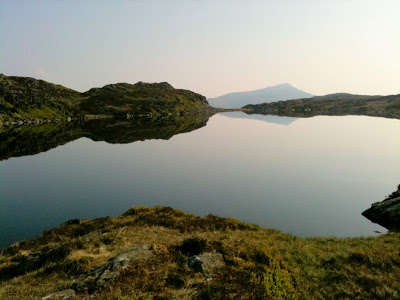 I was a little surprised that it had been such a slog up to the lake which was at 550 metres and it was only when checking the map I realised that I’d actually started lower than I imagined at about 50m.  I’d gotton used to starting out in the Ogwen Valley which is already at 300m.  Dinner was to be Mountain House chilli and rice but after the obligatory 9min hydrating I took my first mouthful to be greeted with the most disgusting chemical taste. I actually thought I was going to poison myself – it definitely tasted contaminated with something but I was starving so wolfed it down. The packet was still in date and I can’t believe they can normally taste that bad so it was perhaps a duff sample.  I munched through some chocolate and had another brew and relaxed watching the last of the sun drop behind the Snowdon massif. 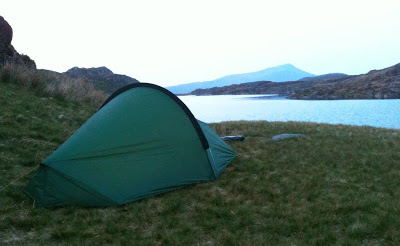 It was so still and peaceful then two bodies appeared over the brow of the hill to the west. They stopped to survey the lake, clearly looking for a camp spot, but I’d already bagged the prime position so they headed over to the other side.  I decided on a spot of cragging to warm up before I turned in as though it wasn’t that cold there was a definite breeze.  I settled in and drifted off to the sound of my iPod, warm and comfy from the combination of my PHD Mimim 3900 and NeoAIr mattress.  The night was uneventful and I was awoken by voices at the other side of the lake and checked my watch. It was 7am and the other visitors were already on their way.  Feeling distinctly lazy I got up and started to make some porridge only to find my 100g gas cartridge running out before the water boiled – in my haste I’d packed a part-used cartridge!  Getting out my Steripen I found the batteries too low to work and without gas I was going to be unable to sterilise water – the perils of packing too quickly!  I was on my way by 8am so I knew I could take my time for the rest of the day, or until I ran out of water.  I headed up onto Ysgafell Wen ridge and bimbled along, dropping down to Llynnau’r Cwn, (another beautiful wild camp spot) and climbed back up onto the ridge, following it round to Moel Druman. It was a lovely day, sunny but with a cooling breeze, and I was in no rush so had plenty of time to amble wherever I fancied, climbs a few crags and generally explore. Heading further south I skirted around Llyn Adar and headed up the northern slopes and up the last rocky steps to the summit of Cnicht.


The scramble down to the scree slope down to the start of the scree descent into Bwlch y Battel was a little precarious, but whilst high I set my sites on Llynau Cerrig-y-myllt, a delightfully secluded pair of lakes where I enjoyed a cooling wash before heading down to the stream which headed back down to the road at Gelli-lago, from where I re-traced my previous evening’s steps back down into Bethania on the A498.   My first night in my Laser Comp had been a success as far as the tent went, but less so in lieu of my lack of gas, water and food!! Put it down to (jn)experience!

After re-hydration I decided to head to Dolgam campsite on the A5 so I could wonder up the road to to the Tyn Y Coed pub for dinner and a cool beer. I hasn’t reckoned on the throbbing crowds at the campsite but I bagged a spot beside the river and scrubbed up in the shower.

The next morning the sun was out and I decided to summit Moel Siabod via Daear Du ridge.  With a lighter day-pack (Berghaus Mach 24) I positively bounded up the track the old mine workings to get the first glimpse of Daear Du ahead of Llyn y Foel.  Once on the ridge the scrambling is relatively straightforward, interspersed by a rocky path.  as a direct route up it’s probably safer tan the scree path that some take.  The views from the summit were fantastic, if a little hazy.    I headed north-east over the secondary rocky summit ridge which affords much rock hopping before taking a direct route down the north-east ridge and back down to the A5.


A quick unplanned trip and a few more lessons learnt!  I enjoyed the Laser Comp – I think we’re going to get along just fine and I’ll post a separate report on my first impressions later.

Views across to the Carneddau 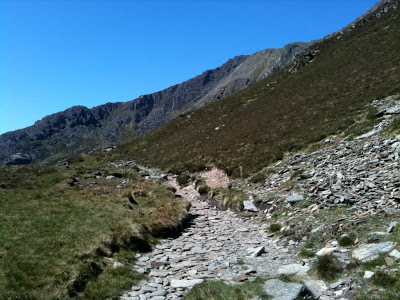 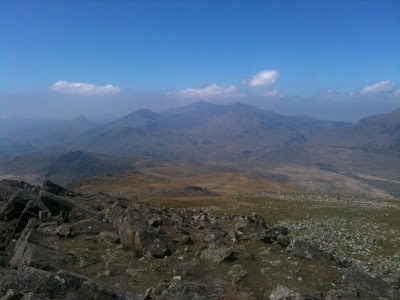 Looking across to Snowdon from Moel Siabod