A window of opportunity. Chance to stuff my pack and jump in the car. The journey up to N. Wales was uneventful until reaching 15miles from Betws-y-Coed when the road suddenly opens up, stretches ahead for miles and the full expanse of Snowdonian range suddenly fills the skyline. From left to right, the Snowdon horseshoe, the Glyders, the unmistakable profile of Tryfan, and the mass of the Carneddeau laid out against the evening sun. It just makes you feel alive – a mountain high!

I dropped into Dolgam campsite between Betws-y-Coed and Capel Curig and pitched at dusk, before popping down to the Tyn-y-Coed hotel for dinner. I was still unsure of tomorrows route at this stage, knowing only it would involve a high camp. I’d check out the map when snuggled up in the tent later.
It was a cold night and I awoke to find a layer of frost on the tent in the morning. I wasn’t in a rush as I knew I’d be walking till late so after porridge I packed up and headed into Betws-y-Coed in search of some provisions and gear. I was after a Rab Vapour-Rise smock or similar (something breathable but wind and weather-proof) but as usual Cotswold Outdoor stocked only TNF or derivatives. I headed up to Capel Curig and parked behind Pinnacle Cafe, hoping the car would be OK for the night. A quick browse in Joe Browns but they didn’t have my size in the Rab or a ME Equilibrium. Next door, Pinnacle Stores stocked some Montane gear and after trying a Scarab jacket (ok apart from a gaping neck) I plumped for a Montane Atomic DT lightweight (240g) jacket, which would probably save me 5oog over my old Berghaus jacket.
After a quick cuppa in the cafe I headed west from Capel Curig down towards Ogwen valley, still unsure whether to head up the Glydereau or the Carneddeau (what happened to the planning?). After a few miles, as I approached the east face of Tryfan, I decided to turn south and leave the Caneddeau for another trip. The sheer might of Tryfan just drew me in to Cwn Tryfan – a giant ampitheatre. As I climbed the path along the base of the east face I could hear the calls of climbers above me. They tend to take Heather Terrace, a natural line of weakness which slants up the east face, giving access to the numerous gullies which offer high-end scrambles and climbs. 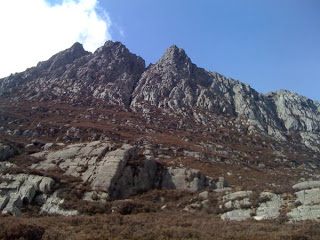 I was heading to meet the Miners Track which joins Bwylch Tryfan and the saddle between Glyder Fach and Y Foel Goch. I joined the main ridge just above Llyn y Caseg Fraith, which was on my mental ‘possible’ camp site list, but it was quite exposed and a strong breeze from the S-W quickly eliminated it from my mental list. 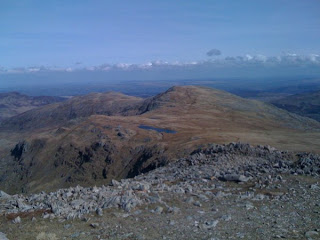 I was finding it tough going with the weight on my back and general lack of fitness (note to self, must weigh my pack and get fit!). The OMM Villain also seemed to be struggling under the weight, never feeling totally secure on my hips, with too much weight on my shoulders. Either I need to reevaluate my packing or I’m pushing the non-framed Villain to it’s limit. My soon to be replaced Marmot Sawtooth bag (1.5kg) and a TNF Tadpole tent (2.3kg) being the main culprits.
I stopped to chat to an old chap who was asking directions for getting back down (!) and we watched people scrambling up Bristly Ridge, which looks particularly, well, bristly, in profile. After a slog up and over the boulders I reached the summit and continued on towards Glyder Fawr, past the impressive Castell y Gwynt pinnacles. I had not summitted Glyder Fawr before and on reaching it I was surprised (dismayed!) at the extent of the drop down to Llyn y Cwn before the steep climb up to Y Garn. Llyn y Cwn was also on my list of possibles and as I slipped and scrambled down the scree, patches of snow still evident, it looked quite appealling but it was only 5 pm and it was still exposed to the S-W wind which was forecast to increase during the night.
My feet were starting to feel it now. The weight of my pack coupled with my new Scarpa Charmoz boots taking their toll. The Charmoz excelled in amongst the sharp boulders and rocks atop the Glyders, the full rubber-rand taking a battering, but there’s little in the way of cushioning – they offer precision over comfort.
I decided, thus, to head down Devils Kitchen path to Llyn Idwal. I’d only seen Devils Kitchen from Cwn Idwal and couldn’t imagine how a path could negotiate what looked like a vertical cliff from below. The path is a long steep rock-step fest running down parallel to the Devils Kitchen itself, the steps bearing the tell-tale scratch-marks of crampons from earlier in the season. As I dropped towards Llyn Idwal I decided to circumnavigate the lake in search of a good camp spot. On the west shore there is a small island (just visible on the OS 1:25000 map) reached by a dozen stepping stones and a quick tour round confirmed it as an ideal pitch. There were still quite a lot of people still heading down and conscious of pitching the tent in such an open spot I sat and made a brew until dusk. I pitched quickly and set about re-hydrating my Reiter chilli con carne (horrible, but tastier after I threw some lumps of cheese in it) and settled in for the night, with my iphone for company (ideal for writing up draft blog posts and listening to music). 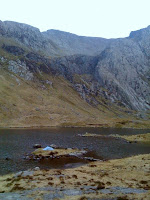 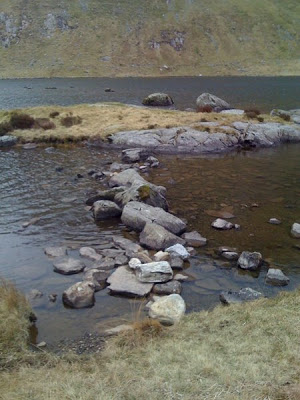 The night was slightly milder than the one before and I slept well until being woken by some very strong gusts of wind at 3.30am. Lack of tent pegs meant I hadn’t used the guy-lines but the Tadpole is naturally stable (and heavy) so I wasn’t too worried and after 10 mins of so the wind abated and I drifted off. 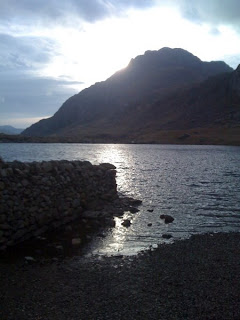 I woke before 7am and made a brew. Conscious of my inconspicuous pitch I decided to break camp early and I had just finished packing as I saw the first person heading up towards Devils Kitchen at 0730. I headed down towards the Youth Hostel at the west end of Lllyn Ogwen and then trekked along the road (feet bemoaning the tarmac) before heading up towards the base of Tryfan. There were a couple of climbers getting ready for Milestone Buttress, and I headed around towards Tryfan Bach, joining the path along the bottom of the valley which tracks back to Capel Curig, where the car and the a well-earned full-english breakfast in the Pinnacle Cafe, beckoned. 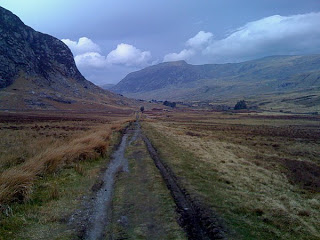 It was great to get away, unplanned as it was. I’ll post some further thoughts on kit/gear and lessons learned in the next few days.

6 Replies to “A Window of Opportunity”