Facebook Twitter Email Flickr Vimeo Link
Bloody weather! I’d cancelled the trip a couple of weeks ago due to the weather and the forecast for this weekend was exactly the same – torrential rain and gale force winds. After a bit of ‘ umming and argh’ing on Friday afternoon I headed up north and after a terrible journey arrived in Capel Curig at 2030. Heading straight for Bryn Tyrch pub for dinner it was 2200 hrs before I pitched the tent at Dolgam campsite on the A5.

I awoke to low heavy cloud and drizzle – not ideal scrambling weather but as I headed down the A5 towards the base of Tryfan I could see several parties making their way up the initial path, heading diagonally up and left below Milestone Buttress. As the path peters out you are forced to take a more direct line up, careful that you don’t hit a dead-end. I’d caught up a larger group who had stopped for a breather and as they were above me I asked whether there was a route up. They suggested it was ok and there was indeed a narrow gully but there was no way into it unless your legs were 6ft long. We all retreated and worked our way a little further towards the main ridge and I ended up tagging along with a group of 6 guys from Chester who were on a regular monthly trip. 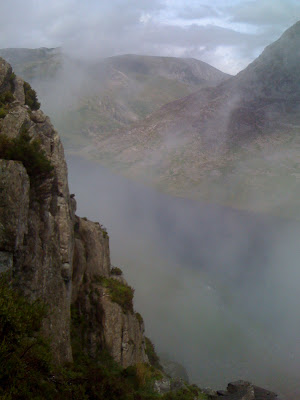 We soon reached the Cannon stone and posed for the obligatory pictures, though somewhat spoiled by the lack of a background view due to the low cloud. The occassional break in the cloud did allow you to spot Llyn Ogwen below. We then spent 10 unsuccesful minutes trying to bluetooth onto my iphone a photo of me perched on the Cannon, taken on someone else’s phone, but to no avail. Proof indeed that mountains and technology do not mix! 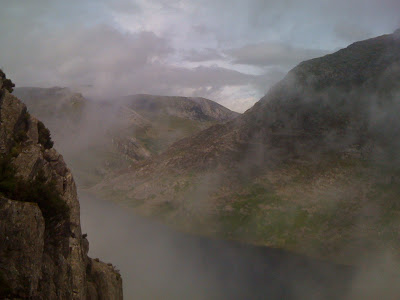 The rest of the climb was largely uneventful save for the worsening weather – picking our way up the north ridge accompanied by thickening cloud and increasingly heavier drizzle. Last time I did Tryfan was a few years ago on a scrambling weekend with Plas y Brenin. This time we were a little quicker up and we reached the summit just at the same time as a large group who proceeded to unleash a rendition of happy birthday to one of the members of their group – so much for peace and solitude at the summit! Lunch was taken huddled between rocks trying to shelter from the wind and the rain. No point in getting the camera out as the views were non existent by now.
The large group descended back down the north face route they’d come up, which I thought unusual, but then re-appeared about 10 mins later back onto the summit and starting down to the south summit at the same time as us. Taking a more direct route we managed to overtake them and quickly reached Bwlch Tryfan. My orginal plan, and that of the guys I’d met, was to continue up Bristly Ridge but the the worsening weather put paid to that and so we descended left, down past Heather Terrace and into Cwm Tryfan, following the path back down to Tryfan Bachm….and by then the weather had cleared!! 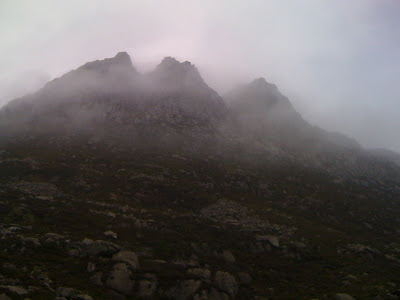 On arriving back at the car parked on the A5 it turned out that I’d actually parked right next to the group, so we ended up having a quick coffee. I’d just like to thank everyone (I’m useless at remembering names but…Rob, Dave, John, Mark et al) for allowing me…..although I’m not sure they had a choice…. to tag along for the day and thank them for their company.
Another evening in the Bryn Tyrch pub (which incidentally is featured in the TGO magazine this month) was followed by a rather blustery and wet evening back at the campsite. I nipped to the loo about 4 am and several tents had received a real battering, one with its fly sheet half off and still flailing horizontally in the wind. Mysteriously I seem to have pulled something in my arm/shoulder while climbing Tyfan and it gradually got worse through Sat evening to the point where I couldn’t actually move it to turn over in my sleeping bag without using my other arm to lift it. Getting dressed was quite a challenge!!! Four days later and it still bloody hurts, the tent is still wet in the garage and I yet again didn’t get to do Bristly Ridge!!!