The main highlight was to be Orla Perc – a kind of extended Crib Goch with a never-ending succession of peaks spires, ladders, chains with a forecast time of 5-6 hours along the ridge, together with a 2-hour ascent and descent either side.  The other objective was Rysy – at 2,499m the highest peak in Poland, and which straddles the border with Slovakia. 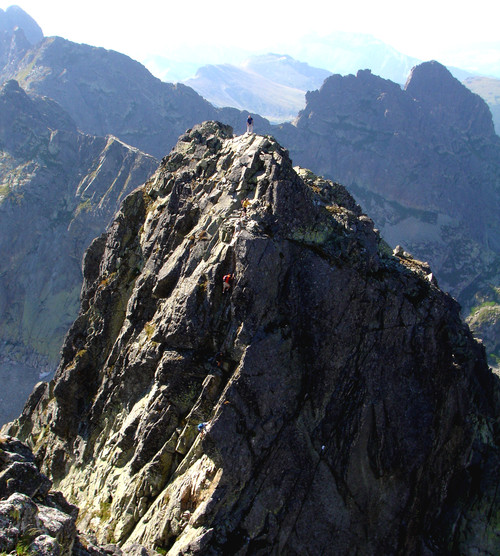 A trawl on the web revealed frustrating little info on routes, huts or conditions.  Eventually tracking down a list of the mountain lodges I was concerned to find the main huts were already full on our planned dates. This called for a more open-minded and creative approach to the route planning, but attempting to piece together a practical route, given the limitations of accommodation was proving to be rather difficult, not aided by the time delay between sending a mail and receiving a response.  Added to the mix was that contact with the hut on the Slovak side of Rysy was via text message – I placed enquiries and questions in English and received random ad-hoc responses in Slovakian!  Eventually after much persistence we had a plan of sorts, which did involve potentially having to sleep on the floor at one of the main huts.

Southend Airport was as painless as can be expected for an airport where the long-stay car park is 20 yards from the main shed…sorry terminal.  David made things more interesting by attempting to get through security with a walking pole strapped to his rucksack with the sharp end protruding in the air.

We hadn’t booked any onward travel but were reliably advised that there was were buses aplenty to Zakopane, the Polish equivalent of Chamonix.  So on arrival at Krakow airport we jumped into a taxi and headed straight for the hostel that we’d booked for the end of the trip, and dumped our posh change of clothes.  The bus station was around the corner where we found there were 3 or 4 buses an hour depositing us in Zakopane some 2.5 hours away.

We walked up to Krupowski, Zakopane’s main street, for a quick look around some shops and as the heavens opened we found shelter in a bar and sampled our first Polish beer.  We needed to crack on as we still had a couple of hours walk to reach the first hut.  Another 10 min bus-ride deposited us at Kusznice from where we would make a 2-hour ascent up to the Murawaniec hut for the evening.   The trudge up through the forest was uneventful save for the un-ending rain and we arrived to a warm welcome and were quickly shown to our surprisingly spacious bunk-room for four.

We ordered dinner and a beer and quickly noticed that most people had brought their own provisions. Unlike many Alpine huts there were cooking facilities and hot-water for those guests who wished to be self-sufficient.  We also quickly established that there were no slippers sandals – people brought their own spare footwear, which we hadn’t. It doesn’t take long to work out the local routine but it was too late for us to do much about it so it was bare feet and purchased meals for us.

After a day of travel we slept soundly and the next morning our plan was to climb up the pass at Zawrat, to gain the infamous Orla Perc ridge and head eastwards along its peaks, troughs and spires. The map suggested it would then take around 5 hours along the ridge till we would reach Kryzne, where we could then descend for another 2 hours into the next valley and reach the Dolina Piech Stawow hut where we had provisionally booked a floor to sleep on.

As we left Murawaniec the weather was rather grim with low cloud obscuring the views and a constant drizzle soaking us more than it should.  As we ascended by a large lake and waterfalls we were sure the usual summer views were spectacular, but alas not today.  The route steepened as we gained height, the remnants of snow became more frequent and chains and the odd ladder and chains protected the more exposed sections.  We had no idea where we were but as we gained height the rain started to turn to snow, with the occasional halistone!!  The sensibility and appetite of traversing Orla Perc in such conditions started to evaporate as we reached the col at 2158m.

Visibility was poor, the rock was wet and it was now snowing.  The prospect of 5 or 6 hours on an unknown route, with no views together with wet rock, ladders and chains didn’t seem like fun, and potentially an unnecessary risk.  So despite my protestations (well I pretended they were all wimps and we should just do it) the group decision was made to press on over the col and descend directly to the next hut.   We were heading down into Dolina Pięciu Stawów, the valley of the Five lakes, which is allegedly rather stunning but there were no lakes to be seen….in fact there was nothing to be seen!  We reached the hut around 3pm with the one benefit of the poor weather being that the hut had several cancellations, so at least we had a bed for the evening.

The plan for Saturday was to head up and over to the next valley, dropping down to Morskie Oko lake and then commencing the long 1,100m ascent up to the summit of Rysy, before descending into Slovakia and the newly re-built Chata Pod Rysmi hut.

Once more the rain meant a damp start and the low cloud obscured any views as we ascended a few hundred metres before David remembered he had left his mobile on charge at the hut’s reception desk. Two hours later and we were descending to Morskie Oko with a break in the clouds gave us our first view of the beautiful lake.   The lodge at Morskie Oko was already rather busy with the day-trippers who had braved the damp weather to walk the 9km from the car-park in the valley. We stopped for a quick coffee and headed around the lake and climbed 150m up to Czarny Staw pod Rysami, a beautiful blue/black lake nestled in a cirque. 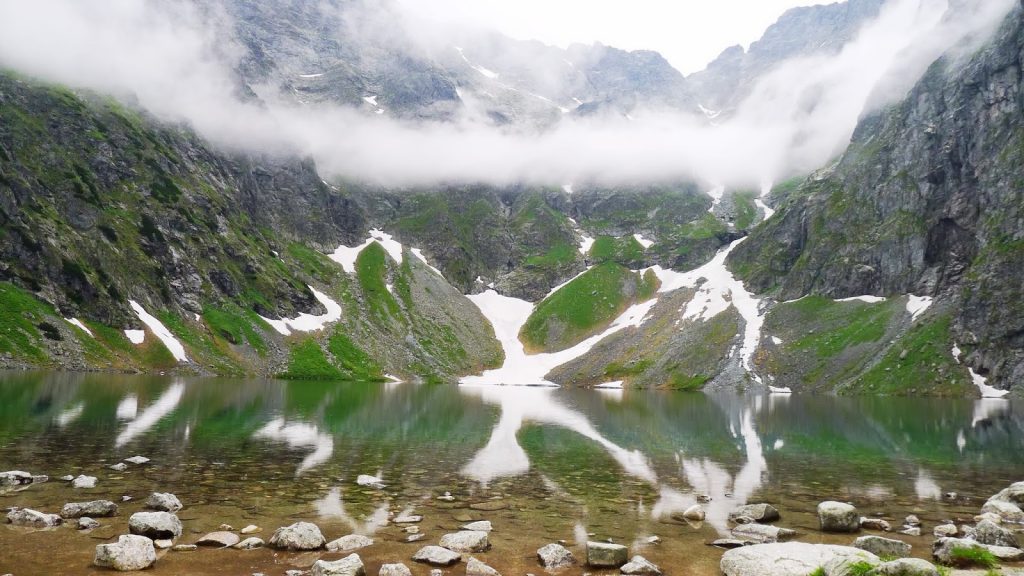 The rain stopped briefly and the cloud lifted just a little, enough to see impressive cliffs and rock spires towering all around us.  A glimpse of our route ahead included a surprising number of snow fields as the path dissappeared into the clouds.  The summit remained out of view and as we skirted the lake and traversed the first snow-field the rain started in earnest once more.  The path was largely manufactured steps from stone and boulders, winding its way relentlessly upwards.  We crossed a few more snow-fields but with visibility so poor we still couldn’t work our where we were or how far above was the summit – our only reference points being the red and white markers painted on the rock and the altimeter on my watch.

As we gained hight we could feel the temperature dropping and the cloud closing in.  The snow-fields became more regular and then the ground steepened as we reached the first chains.   The climbing was probably no more serious than scrambling the north face of Tryfan and the chains in some ways made things tougher – rather than thinking and picking your way up with careful hand/foot placement it was easy to just grab and haul on the chains, except this method was actually more tiring.   Thirty minutes later and we suddently reached a sharp ridge with a sheer drop straight in-front.  This took us by surprise as we were expecting to drop down the other side into Slovakia but this didn’t appear to be the summit with higher ground to the left and right.  Pausing for breath we guessed we needed to move right across a scary ledge with huge exposure.  After a couple of careful steps we found a welcome chain on the far side of a block and we traversed a ledge to gain higher ground and the summit blocks of Rsys proper.   Enveloped in cloud we didn’t hang around but were debating the route down onto the Slovakian side and checked with another group coming up.  Confusingly they appeared to be coming up the same route as we had come from but they confirmed they had come up from the Chat Pod, our destination.   So we headed off, still unsure of our route, until half an hour later we reached a col and looking right we could just pick out roof of the hut – a welcome sight. 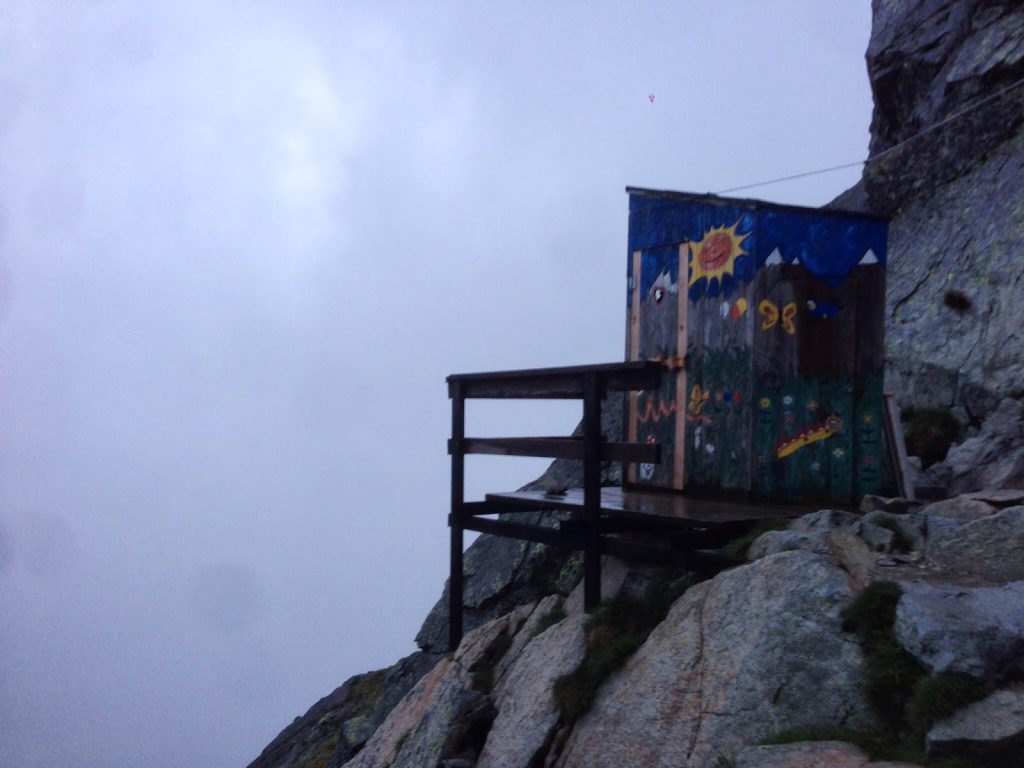 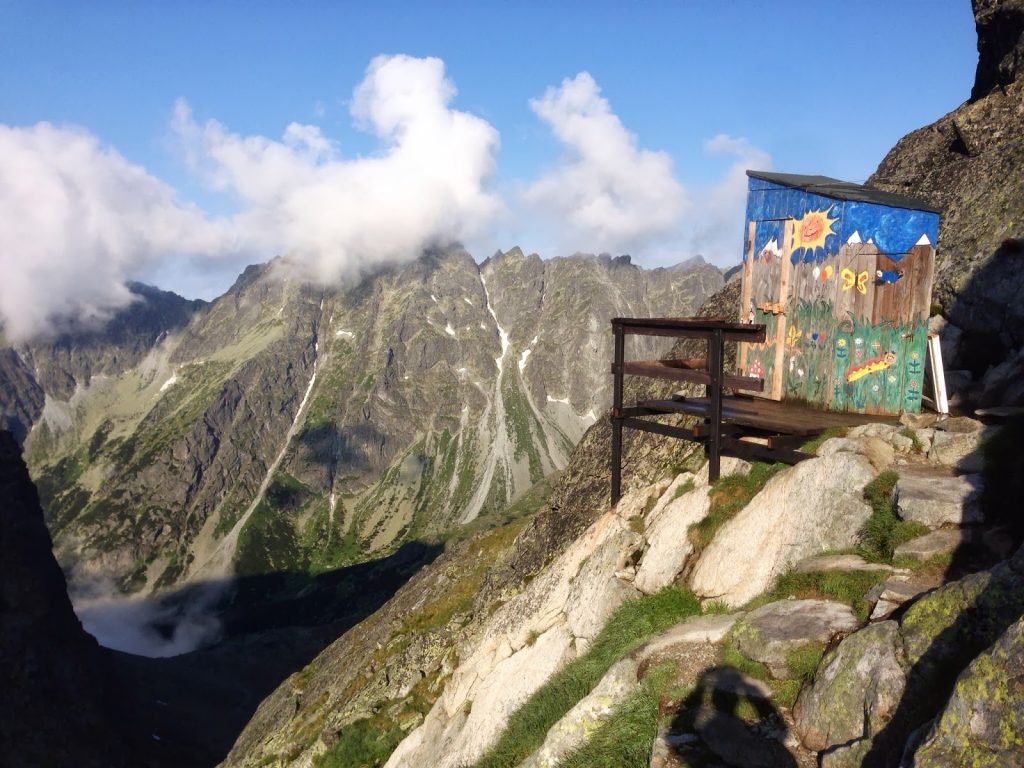 The Panoramic WC with the morning view

The hut was completely re-built a couple of years ago after being hit by an avalanche.  Just by the door we passed a sign pointing towards the panoramic WC some 100 yards up a rocky path, so clearly the re-build didn’t include sanitary facilities.  The hut was already busy with drying jackets and other clothes strewn everywhere. We relaxed over a beer and claimed our pre-booked bunks.  There was no chance of a shower as the hut doesn’t have running water except for the well-equipped kitchen. The goulash was particularly tasty as was the dark Slovakian beer which aided the slumber which pervaded our tired group.

After an unventful night in a full dorm, we awoke to a glimpse of sun through the window and our first view of the valley below.  The WC already had a decent queue from people who’d crossed their legs all night rather than brave the trip to the loo during the night.  Indeed the WC shack was rather well-equipped with a sit-down loo albeit over a hole, a tap fed from a stream and a full height double glazed window providing particularly fine views while one contemplated.

The last view looking into Slovakia

After a quick museli breakfast we left and re-traced the previous evenings route back up to the summit of Rysy. We we were looking forward to our first views of the Tatras from the summit but we could see the cloud rising up the valley and 15 minutes later we were once more enveloped in cloud.

With little visibility the descent from the summit into Poland was still as confusing as ever as picked our way down, alternating between a path and chains. 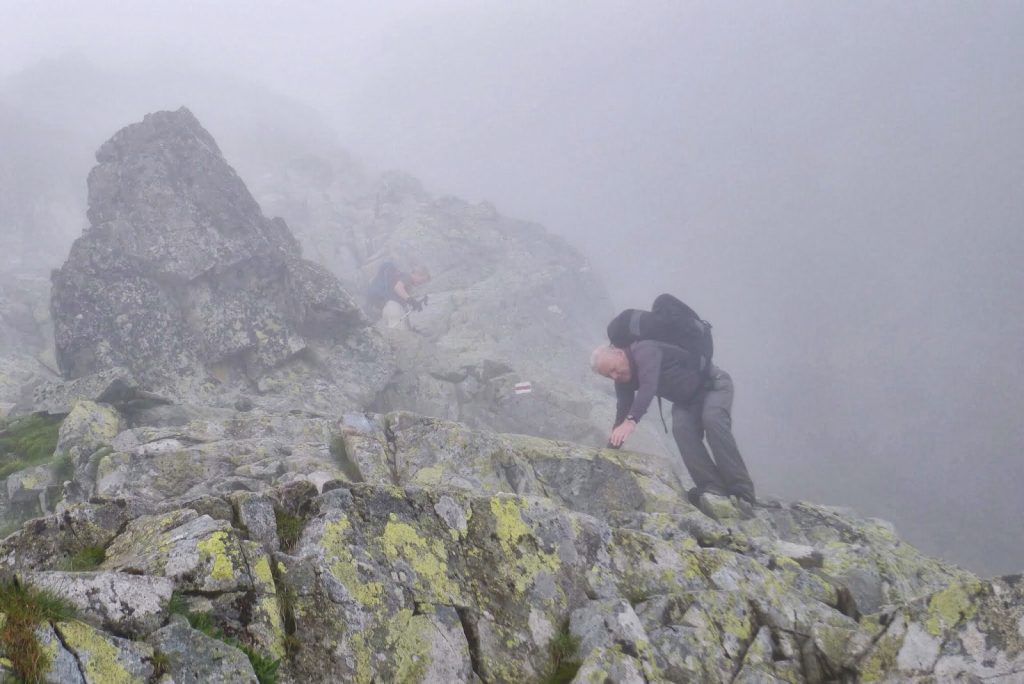 At the first sight of running water we stopped for a welcome brushing of teeth and freshen up. 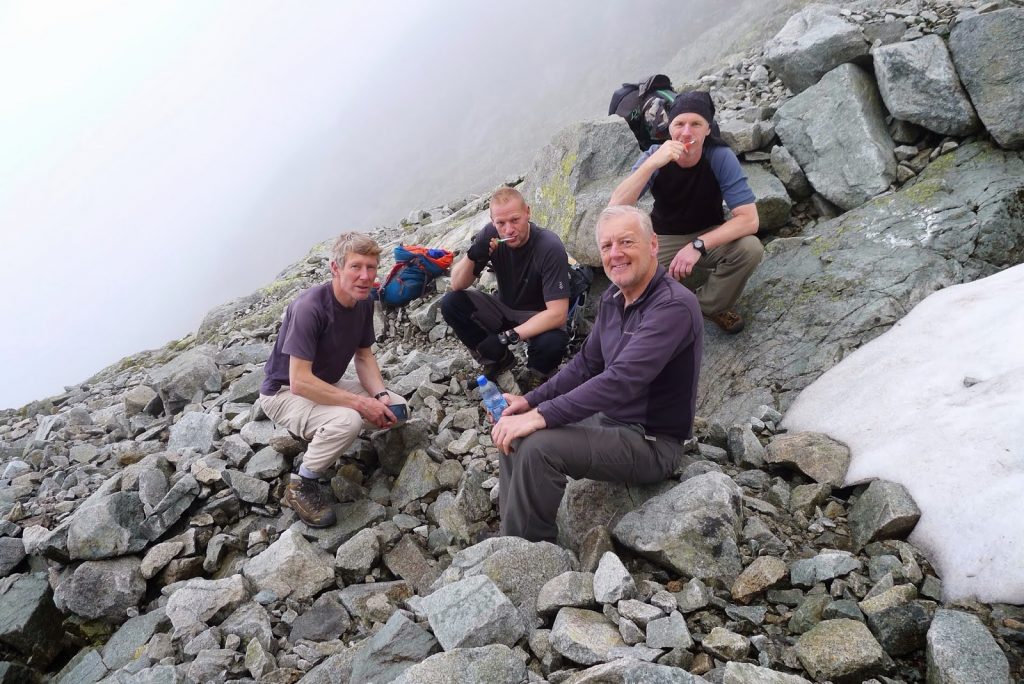 After a couple of hours of descent the cloud broke and provided a wonderful view straight down to the two lakes ahead of us.  Alas it was just a tease with normal weather resuming as we trudged down and finally reached Morskie Oko and the sanctuary of a celebratory beer. 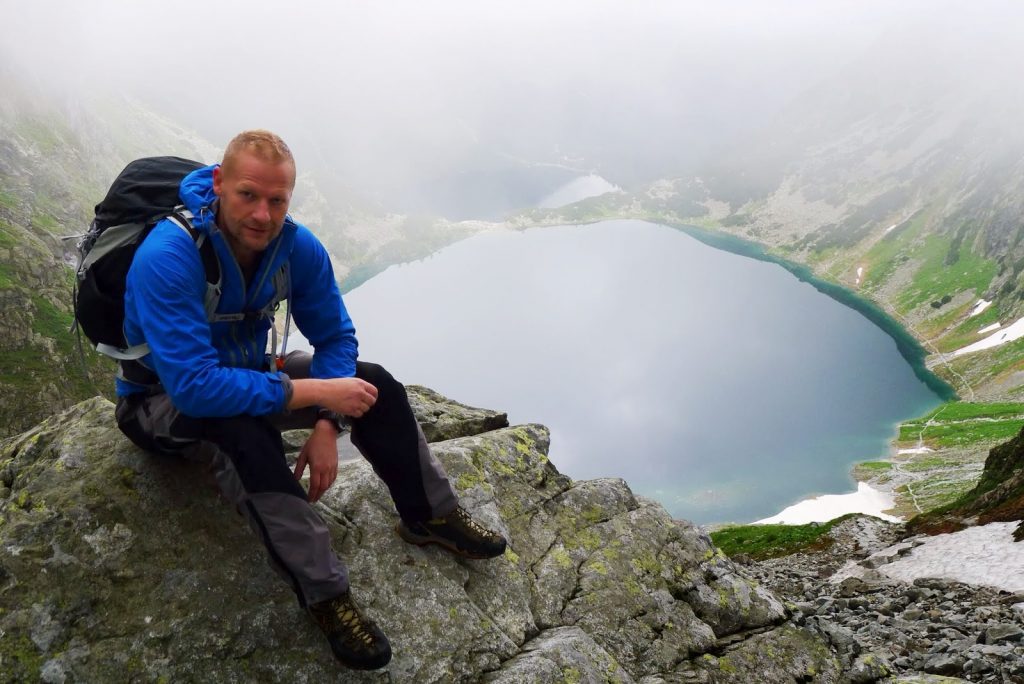 We still had a 9km walk down the tourist path to catch a bus to Zakpopane where we wasted no time and tramped straight to the bus station.  Three hours later we were enjoying a welcome hot shower in our Krakow hostel and shortly thereafter we were strolling through the crowded streets and market squares of Krakow before our flight home in the morning.So Orla Perc lives to fight another day.  We were all agreed that the peaks/views we had glimpsed were indeed worthy of a return one day and we can recommend them for anyone looking to visit further afield.  And, as if by magic, normal weather resumed as soon as we left and Zakopane has bathed in a constant 29/30 degrees ever since.

5 Replies to “Trekking in the Tatras”