Facebook Twitter Email Flickr Vimeo Link
It was all planned as I headed up the M6 on Thurday afternoon. After picking up my nephew at Charnock Richard services, another 90 minute drive saw us into Ambleside for last minute provisions, before heading for Great Langdale camp-site.
I’d been feeling a little ropey over the past few days – a bit of a sore throat and a few snuffles, typical of a brewing cold. We pitched up the Tadpole at the NT campsite and after sorting our stuff headed over to the Stickle Gill Barn for dinner. The weather was overcast and though the forecast didnt look great, I was still hopeful. Retiring to the tent I proceeded to have a terrible night’s sleep… hot then cold, searing headache, streaming nose and little actual sleep. At breakfast I really wasnt feeling well, so we decided that rather than the planned wildcamp, we’d leave the tent at the camp-site, go for a day walk and see how I felt.
The weather was OK as we headed along into Mickleden valley along the Cumbria Way to where the path splits; right to Stake Pass and left heading up the eastern flanks of Bowfell to the col between it and Rossett Pike, our planned route up to Angle Tarn and Esk Hause. It had been a struggle even walking along the floor of the valley and I realised then I just didn’t have the energy to start heading up, so with regret we headed back to camp and packed our gear. 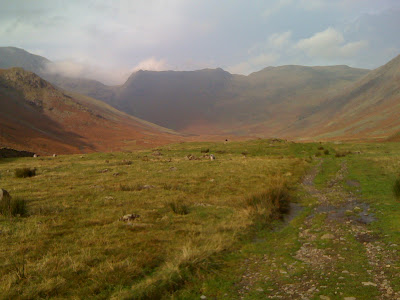 Looking up Mickleden to Rossett Pike
A prolonged five-hour journey on a Friday afternoon saw us arrive at my parents house, where an early night was followed by the whole of Saturday and most of Sunday in bed with flu. Following the NHS Swine-Flu Questionnaire I was afforded an on-line prescription of Tamiflu – a little late I suspect!!
Looks like the Lakes had other ideas this weekend, as Robin over at blogpackinglight also had his trip cut short. Best laid plans and all that……!!!

3 Replies to “The weekend that wasn’t…what a swine!!”